Vision of Public Broadcasters in the 21st Century 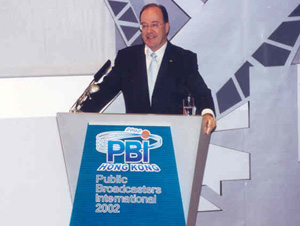 Donald McDonald shared his experience and vision as chairman of ABC, Australia.

"You can only predict things after they have happened."
Eugene Ionesco - Rhinoceros, (Grove Press, New York 1960 - p.74)

I hope I am not here under false pretences. I have been asked to speak about a vision for public broadcasters in the 21st century, yet I wonder if I have that certainty of foresight. If anything has been proven by our experiences during the last decade, it is that our predictions should be less confident.

Nor is there, I suspect, a simple narrative for such a complex beast as public broadcasting. We have so many different origins, histories and local contexts, differing places in our national cultures and media environments.

However, I am certain our experiences during the last decade are very similar. Inform, educate and entertain, though sometimes mocked as a set of impossibly virtuous slogans, have still been up there getting our attention.

Yet close behind them, exacerbated no doubt by the end of an era sense brought on by a new millennium, were crisis, competition and confusion. Those reliable understudies, waiting in the wings, are always ready to put in an appearance in the great drama of public broadcasting.

I have been Chairman of Australia's national public broadcaster, the ABC, since 1996 and I've seen a few predictions come and go during that time.

Earlier last decade, pay television was set to blindside and marginalise free to air broadcasters, including the public broadcasters, as it rapidly grew in Australia - yet in Australia it has reached just 22% of households, and though still growing slowly its balance sheets have been written exclusively in red.

The ABC survived the new millennium and all its fuss about Y2K without a moment of chaos - just as your own organisations did. And the ABC continues to grow in 2002, reinventing and reforming itself, constantly adapting to the change that is all around it. It now has the largest audience shares in its history, despite the arrival of that great experiment nearly two years ago, and the cause of our own Age of Anxiety: digital television.

I'll talk further on about the digital state of play for public broadcasting in Australia. However, I do think we sometimes underestimate the time it takes for a society to absorb serious cultural change, how long it takes for the effects to be widely felt.

Which reminds me - Australians have not yet converged either, and are still dedicated to different screens and different machines for different content. Inevitably that is changing, again slowly. It may be that we continue to make those distinctions.

During these past six years we seemed to have so often looked at public broadcasting in the clarifying light of imminent loss - and it has firmed our resolve. These past six years have also provided an awful lot of hindsight - and hindsight at this point seems far more reliable.

Having said that, if I confine myself to a few matters that Australia's public broadcaster is contending with now, I can be confident that they are relevant to you as well - though your solutions will be different. I'd like to talk about some of the contradictions engaging us today.

Local content - stories about ourselves - presents some perplexing contradictions for public broadcasting television.

It's often been the ABC's experience, particularly with drama productions, that the more faithfully our own culture is reflected in a production, those elements that set Australia apart, the less chance it has of being sold into other markets.

Yet often the public broadcaster producing expensive comedy and drama is up against an expectation that though culturally unique, these programs nevertheless might recoup some of their costs through sales into foreign markets. That's quite a contradiction.

The rise in localism in other countries means of course, a shrinking market, less funds available to import foreign programming, adding to the dilemma.

It's not often that the sheer novelty of a foreign culture, or how exotic it appears, is enough to see it succeed in foreign markets. A program might get lucky, and locate the universal within a story that is culturally specific.

And the cost of dealing with Australian culture so intimately was, of course, seen in the reduced possibilities of foreign sales. Yet as a public broadcaster there was no choice.

The digital model mandated by Australia's federal government was high-definition television. With its drawing power largely confined to better pictures and sound, it has not been much of an inducement to buy new televisions, not much of an advantage over existing ones.

It was suggested that uptake of high definition digital television might be slow. In the history of predictions about digital, this prediction may have been a first - it was clearly correct. Less than 1% of Australian households have taken up digital television in almost two years. It's difficult to imagine how it could possibly have been slower.

Though the ABC was not convinced that better pictures and sound would be enough, we did, however, get behind that decision to carry the nation towards digital. However, we were limited in how much practical support we could offer, since we were not appropriately funded for digital programming.

At stake now is a massive public and private investment - estimated at $1 billion - and a huge infrastructure that has been rolled out very rapidly. It is sitting there idle. We are keen to see that investment realised.

Within its existing means, without extra funding, and with an eye to future audiences for a future technology, the ABC launched Australia's first new digital channels - ABC Kids for children (as you might guess) and Fly for teenagers (as you might not.). We believe these will help people see the difference and the possibilities of digital, and increase its value in the eyes of potential audiences.

The ABC believes that a focus on interactive programming on our digital channels will galvanise the entire digital broadcasting sector - by giving it meaning and making it live for audiences. And quite possibly of course, we might all at last be rescued from the plague of jargon.

Interactive content adds so much to a program, enabling it to be more deeply experienced through extra value of archival material, interviews, and more detailed information.

The ABC will be seeking appropriate funding through its triennial funding negotiations with Government to cover the extra cost of providing this additional programming. As the trusted national public broadcaster, the ABC can help educate Australian audiences about interactive services, and play a research and development role within the Australian industry.

When founding public broadcasting, Reith brought into being not just something that did not exist before, but something he could not have imagined.

Public broadcasting would be unrecognisable to him in its many current manifestations, having grown and changed in step with the world around it. It is as much a part of the present as of the past.

Importantly, its original spirit has lasted.

We still have a need for radio and television and new media content - independent of commercial and political influence, which defies demographics and asserts our individuality.

The commercial sector is actually very good at giving people what they know they like. The public broadcaster is still required to extend ourselves and our possibilities, present the gift of discovering new interests that can never be located within the focus groups.

It is still required for programming that might trouble a firmly held belief, and change the way we view the world rather than simply confirm it.

I spoke before of the danger of predictions. Yet I feel certain that further into this century public broadcasting will be as vivid as it is now, and undoubtedly gripped as always by threats - though we are unable to imagine what they might be at the moment.

We will not yet be looking at it as a museum piece or some pleasing archaeological reconstruction born of the illusions of the twentieth century.

Like democracy, it may never be perfect, but it as close as we get to what's best, mixing the energy of the popular with the possibilities of the good.

And while its contradictions are many, the hopes of public broadcasting still outnumber them. It has not lost its gift or its nerve, nor lost sight of those tremendous possibilities that Reith dared to dream up in the gloom of a London winter over seventy years ago.