Changing the Social Fabric: The Impact of Media Convergence

Media convergence refers to the technological integration of voice, video, and data networks to form new communication networks, bringing together formerly separated functions and creating additional ones. Industrially, it refers to the partnership among corporations from different industrial sectors. Socially, it assumes that consumers will prefer the converged products. Convergence is made possible by deregulation, digitization, globalization, and the development of telecommunications networks. The shift towards convergence signifies a fundamental break from the past, carrying immense implications for the ways that we communicate, live, and do business.

To Marshall McLuhan, who envisioned the emergence of the global village, the medium is the message. This profound observation should apply to the new media: the new ways in which messages are delivered and presented will affect our way of life and perceptions of the world. Yet in this digital age, the content is also the message. It is difficult to imagine a pipeline without oil, or a superhighway without cars. Similarly, an information superhighway ceases to be meaningful when it has no information. Content is at the core of the information infrastructure, and its importance will heighten as channel capacity multiplies. Those who own useful data and entertainment fare will be in an enviable position in the digital world. Whether Hong Kong, as a regional center of content production, can build on its past achievements and exploit the promise of the digital age remains to be seen. The new multimedia technologies enable the creation and distribution of converged media products. Companies from various sectors, including media and telecommunications corporations, are forming alliances to bring about the convergence of computers and TV set usage. The best known case is the merger between AOL and Times Warner in 2000. Such consolidations are taking place at both the global and national levels, resulting in domination by major transnational corporations who often form partnerships with big national players. As these corporations are rich in capital, content, and distributional capability, their domination favors the development of a globalized culture which, in essence, is Western. Some Hollywood figures and products have indeed become global icons and household names around the world. However, this is not necessarily a complete victory for Westernization, because studies have shown that people still crave local information and cultural identity. It appears that globalization and localization are taking place at the same time, and that the digital media are playing an instrumental role in the process. Media convergence has certainly heightened the tension and interaction between cultural globalization and localization, and posed challenges for the national regulators, media operators, and anyone who cares about the development of indigenous culture.

The old media not only offer less choice for consumers, they are also much less interactive than the new media. Consequently, the old media audience is primarily composed of passive consumers. In contrast, interactivity enables the audience to be more proactive in their approach to media and services. Those who know what they want will enjoy a higher degree of freedom. As channel capacity increases along with the use of interactivity, content and services will become more specialized and customized, resulting in segmentation and individualization. Anything digital, be it entertainment or information, can be rendered on demand. Those who have the will and the purpose will soon be watching television less as"couch potatoes", and more as a goal-driven audience. If that is the case, then we must consider whether it will result in social fragmentation. How we can continue to maintain our sense of community under these circumstances is an important question.

Compared with the old media, the new media can be much more subversive. Being digitized and distance-insensitive, they can more easily penetrate through national borders. News reports about what has happened in one place can be circulated around the globe within seconds. People's acquaintances are just a click or a dial away. The boundary between the foreign and domestic is thus blurred. What regulators can do to prevent undesirable communication or to fend off harmful content is not clear at this point. The nation-state has seemingly lost part of its jurisdiction over the regulation of media, and part of its influence over the shape of the domestic mediascape.

While the insensitivity of the digital media to distance tends to open every country to the strongest competitors from around the world, it is a double-edged sword for territories with small domestic markets. Hollywood owes its strength to that fact that it has a large and affluent national market. For Hong Kong to stand up to the competition from Hollywood, it must vastly expand its market. With the digital networks, Hong Kong can more easily reach out to other Chinese societies, including mainland China and Taiwan. Of course, this will not be achieved with the technological properties of the digital network alone. They have to overcome the political and ideological barriers that remain.

The digital media is also insensitive to time. On the one hand, it makes time-shifting a routine occurrence. The audience can retrieve what they want at any time, regardless of whether they are travelling on a plane or relaxing at home. The media become huge searchable data and entertainment archives, enabling the consumer to navigate the content in a customized way. This navigation allows users to explore the data in ways that are virtually impossible with the traditional media.

On the other hand, digital media makes instancy possible. News information can be updated around the clock. Where a printed newspaper has a product cycle of 24 hours, digital news can be updated in a matter of seconds. The proliferation of speed adds up to the acceleration of history, and the fluidity of society. People from all walks of life, including politicians and citizens, will have to make more immediate responses as information reaches them more quickly and frequently.

In America's Old Economy, the stock market was a source of stability: people could only check their listings on a daily basis. However, the Internet and CNBC have changed all this: people monitor the trends closely, and click their brokers to put their observations into immediate practice. The fluidity of society will be further enhanced with the advent of third-generation digital technology, which allows users to send and receive all sorts of multimedia data wherever they roam. The resultant speed of communication can even complicate the course of historical development, such as when the media prematurely announced the victory of George W. Bush in the recent American presidential election. 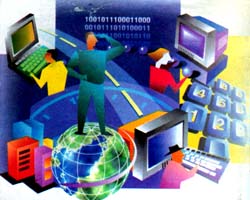 The new media have not only widened the choices of consumers, but they have also helped to expand the space for citizen expression. One clear example of this is the rise of BBS in China, which allows criticism of corruption within the Chinese Communist Party and among government officials. In a country where civil society is dwarfed by the state, the existence of such virtual communities is of crucial importance. While it is too extreme to claim that the new media will bring about democratization in China, it is fair to conclude that, given the multiplicity and interactivity of the new media, they will promote a more liberal mode of communication. At the very least, they provide more channels for the state to tap public opinion. The Internet is potentially a valuable resource in attempts to achieve greater democracy, allowing for more rapid organization, communication, and even deliberation. The public are able to express their views, and are in turn exposed to a wider range of views.

It is well established in communication studies that as information is infused into a social system, there arises a widening knowledge gap between the educated and the less educated. As the new media proliferate, a digital gap emerges. While the better off can benefit immensely from the new media and information technologies, the poor and the uneducated are largely cut off from the digital revolution. This digital divide is even more alarming at the international level.

According to UN statistics for 1999, industrialized nations with only 15% of the world's population are home to 88% of all Internet users. Less than 1% of Southeast Asians are online, even though the region is home to 20% of the world's population. There are only 1 million Internet users on the entire African continent, compared with 10.5 million in the U.K. In Sudan, only one of 95,000 people is an Internet user. The bridging of this gap at both the national and global levels is an important issue for governments, educators, and regulators. Without due measures, the widening digital gap will compound the potential conflict between classes and nations.

Whenever a new medium arises, people tend to predict that it will hasten the demise of its traditional opponents. This happened when radio emerged to compete with newspapers, and when television began to challenge the cinema. Yet these media now co-exist, and history has demonstrated that the traditional media are more resilient than is usually appreciated. They often reinvent themselves, and find a new niche in the competitive environment. Media convergence will perhaps unify the way in which information is delivered and received. However, the format and genre of the traditional media will remain for a long time to come. The traditional media will be enhanced by digital functions, and become more like computers.

Competition among media, both old and new, is heightened in this digital age. There is a tendency to test the traditional definitions of ethical behavior of content producers. Recently a cyber daily's reporter in Hong Kong showed a 6-minute"news video"of his sexual acts with a prostitute. What is news? What are the professional codes? Are the rules for cyber news to be different from the newspapers and television? The new media will be a testing ground for the professional values that were once cherished by media practitioners. So far, the record is mixed: while some websites have violated professional norms, others abide by the codes of practice.

Media convergence, as spearheaded by the Internet, marks a revolution in the ways that audiences relate to the media. However, we are only at the inception stage of this revolution, and are still uncertain of its exact course. For want of extensive empirical evidence, we should not take any predictions for granted. The new media are known for their huge channel capacity, interactivity, mobility, and compatibility. These technological properties enable the creation of converged media products that can be accessed everywhere, and almost instantly. However, this abundance of information is not always beneficial, and it may yield information explosion or fatigue. As digital media multiplies, the need for interpretation and thoughtful analysis will intensify. Media literacy will become more important. People have to be taught to be more proactive in their approach to media, especially when the choices increase exponentially. Although we may not know how the business models for the new media will work, as producers, regulators, consumers, and researchers, we are certainly living in interesting times.