The history of modern Chinese design is virtually unknown due to its relatively late development compared to design in the West. Not until recent decades since the opening up of China in 1979 has a unifying Chinese graphic design history started to form, assisted by rapid economic development and interactions with Hong Kong, Taiwan and Macau, which together with mainland China make up the Greater China region.

Traditionally in academic practice, it is common to separate investigation of these individual Chinese societies as singular entities. Matthew Turner, one of the few Western historians to examine Chinese design, has recovered the early history of Hong Kong design prior to the 1960s which, he notes, has been "simply not believed to exist." Chinese-trained design scholar Shou Zhi Wang emphasizes that there has been very little written about modern design in mainland China because design activity under the communists prior to the start of the Open Door Policy in 1979 was mostly in the service of party propaganda.

With the recent political developments of Hong Kong and Macau returning to Chinese sovereignty in July 1997 and December 1999, respectively, it is now possible and even preferable to consider a unified history of Greater China rather than simply individual histories of these locales. In addition, during the past decade important political solidification has taken place, and the various locales within Greater China have been engaged in increasing levels of cultural and economic exchange such that it makes little sense at this time to consider each locale as a separate entity. Although it might not make sense to treat Greater China as a single entity for the purposes of writing a political history, the locales do share a great deal of cultural similarity and creative cross-fertilization that has taken place throughout many decades in spite of political shifts of great magnitude. Arguably, then, the history of Chinese graphic design can be understood more meaningfully as encompassing the whole region rather than as a set of discrete local histories.

Many of the influences that made their way into modern design throughout the Greater China region were carried through centuries of production in Chinese arts and crafts traditions. These traditional elements were later combined with foreign influences to form dynamic modern design styles. The most prominent example of Chinese modern design is found in the Shanghai style of the 1920s and 1930s. Design works produced in Shanghai during this period reflect various outside influences due in large part to the existence of numerous foreign concession zones in the city.

The Shanghai period represented both the beginning of Chinese modern design and the best of this emerging form before the Second World War. Creative design work of the quality produced in Shanghai could not be sustained during the war, and after the Communists gained power in 1949, commercial graphic design was seen as a symbol of "Western lifestyle" and said to be a "waste of national resources" because it encouraged the consumption of non-necessary products. However, the Shanghai spirit of commercial graphic design continued under the capitalist economic system and British colonial rule in Hong Kong after the war.

The level of talent and quality of creative production in Hong Kong prior to 1950 was never equal to that of Shanghai, nor was the direction of development begun in Shanghai picked up straightforwardly after this time. From the period after the war through the 1960s, commercial graphic design developed at a steady pace in Hong Kong. Turner argues that Hong Kong was able to maintain its modern Chinese design style until at least the 1960s, through the contributions of both mainland and Hong Kong designers. He attributes a rapid fading of Hong Kong modern design style after 1960 to the influx of American companies and to government assistance for American design specialists rather than local designers. Chinese local designers previously trained in Guangzhou and Shanghai had to gradually alter their style to fit into the new commercial environment dominated by American companies and to meet the standard set by American-trained designers. This transition was significant to the history of Hong Kong design because it brought Western design theory and principles directly into contact with Chinese culture.

Among the newly arrived American designers during the early 1960s, Henry Steiner has been the most influential. A graduate of Yale who arrived in Hong Kong in 1961, Steiner demonstrated new possibilities in incorporating Chinese cultural symbols and written characters into his otherwise Western-style design works. In Hong Kong he successfully established the principle of cross-cultural design, successfully adapting the generally understood concepts of Western design into the Hong Kong/Chinese context.

While Hong Kong was developing towards a new direction in graphic design through the inclusion of Chinese elements, communication between Taiwan and Hong Kong were not well established. Taiwan design was less developed than Hong Kong's due to the suppressed political control and restricted personal freedom. Commercial graphic design was also underdeveloped on the mainland under the tight ideological control of Communist regime. Propaganda materials such as posters and publications designed for the service of the party were the main graphic design activities. The cultural revolution period from 1966 to 1976 brought about the virtual elimination of commercial graphic design work in mainland China.

Spreading the Seeds of Communication 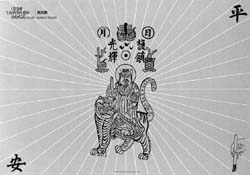 The 1980s was the era during which Hong Kong played a major role in fostering and building connections with design practitioners and institutes in mainland China and Taiwan. In 1982, Hong Kong designers responded to the invitation of a Taiwanese graphic design group to participate in the Exhibition of Asia Designing Masters held in Taiwan in 1982. Compared to work from Hong Kong, Taiwan graphic design was less exposed to Western design due to political constraints, censorship, and martial law on the island until 1987. The early 1980s also saw the rise of the awareness of Hong Kong Chinese of their identity due to the unveiling of the issue of the coming handover to Chinese sovereignty in 1997, which led to the development of two divergent design trends in Hong Kong. The incorporation and exploration of traditional Chinese elements, begun in the mid-1970s, was furthered and refined while at the same time another strand of local design work developed toward the expression of pure Western themes.

By the mid-1980s when Hong Kong designers were developing into two divergent design trends, their works began to be exhibited in mainland China on a regular basis. For example, the winning pieces from the HKDA shows of 1986 and 1988 traveled to Guangzhou. Through such shows as well as visits from Hong Kong designers, Hong Kong was able to export some influence to mainland China. Although Hong Kong played a leading role through the 1980s because of its relatively free and liberal environment for creative ideas, starting in the 1990s the quality of graphic design work in mainland China and Taiwan improved rapidly to reach an international standard. By the late 1980s, the political situation in Taiwan had become more liberated, and economic development was in the direction of international linkages. From this period on, rapid improvements in the quality of Taiwanese design can be seen, and Taiwanese design organizations began to initiate joint activities within the Greater China region.

A New Era of Interaction

Graphic design in Greater China is definitely entering into a stable environment, with the economy and politics of the region in a relatively secure state. Hong Kong once enjoyed a leading position among the locales within the region, but with the developments of recent years it seems unlikely that this former dominance will be renewed. While Hong Kong and Taiwan will likely keep up their high quality work, their sheer volume of output will never equal that of the mainland designers, who have recently been outstripping their Hong Kong and Taiwanese counterparts in sheer numbers of awards won, in large part due to the fact that there are many times more active designers in mainland China as compared to the other locales of the Greater China region. The future will definitely see an increasing visibility of mainland designers on the international scene.