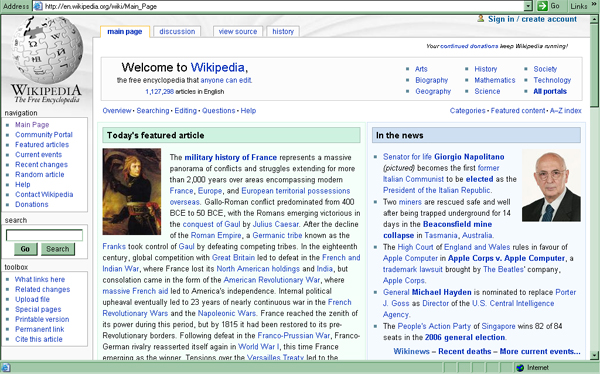 Jimmy Wales and Stewart Butterfield/Caterina Fake together with George Bush and Hu Jintao have been named by the editors of the Times Magazine as four of the world's 100 most influential people this year. The latter two are globally renowned. They are the presidents of the U.S.A and of China, respectively and world leaders influential to world politics and development. The former are great inventors and IT practitioners famous in the IT world. They are influential to the latest WWW development and forerunners of the new WWW era, namely Web 2.0.

Jimmy Wales invented wikipedia (http://www.wikipedia.org), which is an on-line encyclopedia completely owned by the Web community. Web users can freely add entries to the system. These entries will be publicly shared; as such even users other than the owners can freely edit any wikipedia entry. Note that wikipedia "is already in the top 100 websites, and many think, it will be in the top ten before long."

Flakr (http://www.flickr.com) is a company founded by Stewart Butterfield/Caterina Fake. The company provides photo sharing services, by which owners can store their photos and make them public; and thereafter other users can freely search and comment on them. These are classical examples of Web 2.0, which is the paradigm of the latest WWW era.

Web 2.0 has become the buzzwords for many IT vendors and solution providers lately. It is very common to observe declaration such as Web 2.0 enabled" Web 2.0 compatible" Web 2.0 compliant" "true Web 2.0 technology" etc. in today's Web products. But what exactly is Web 2.0"? This article attempts to answer this question by first outlining the core competences of Web 2.0 in Section 2; Section 3 presents the characteristics of the technology that supports these competences; the awareness in design due to this type of new technology is described in Section 4; and finally Section 5 gives a few concluding remarks from a cultural prospective.

Strictly, Web 2.0 is not a technology; instead it is a system behavioral model over the WWW. The core competences of the Web 2.0 paradigm entail: