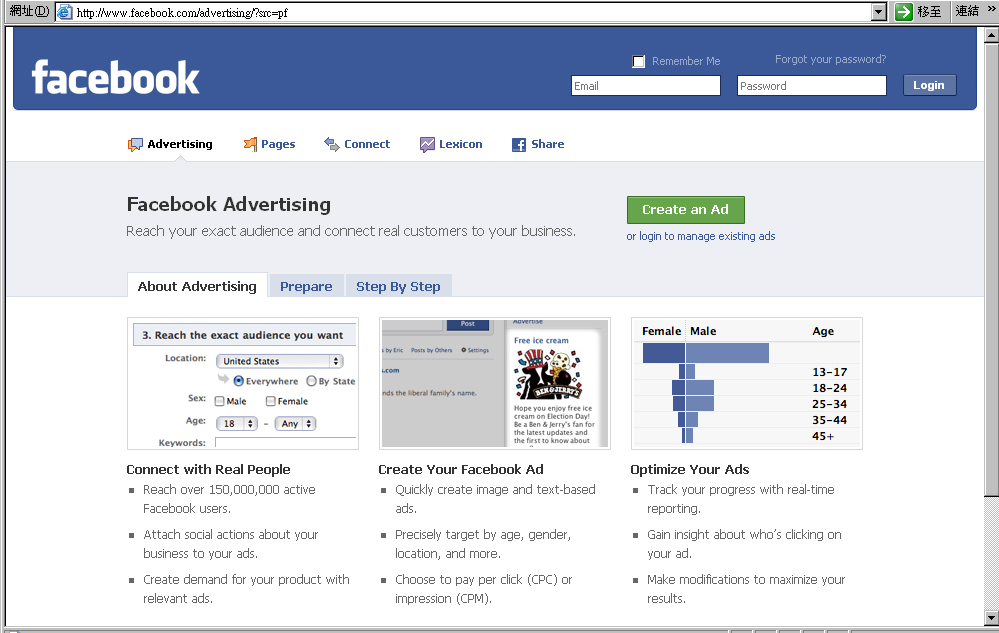 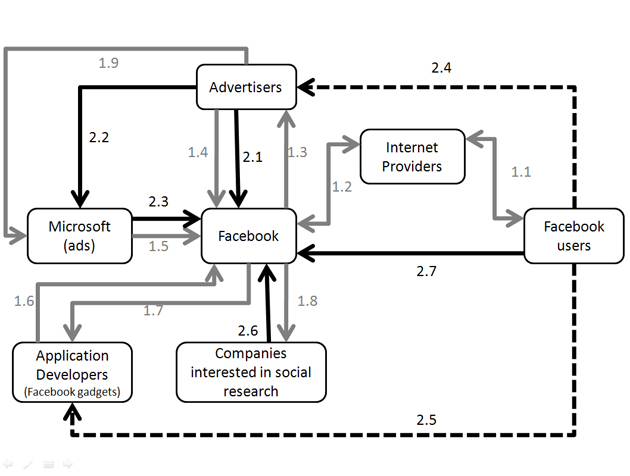 Recently, Facebook has been in the news in connection with its membership, identity phishing and privacy concerns. It is one of the best-known social networking sites (with more users in the West than Bebo, Disney's Club Penguin, Friendster, Hi5, LinkedIn and MySpace) and has a membership claimed to be in excess of 90 million. In spite of this, very little is known about the people and organisations behind the site and the revenue streams underpinning its existence.

Facebook has tried to emulated Google's advert placement services, but sources in advertising say that is far from clear whether the targeted advertising approach makes sense on general social networking sites where the algorithms driving ad placement do not necessarily do a very effective job of placing relevant ads on user's home pages.

There are clear differences of interest among private users and other stakeholder groups. Privacy concerns arise on a site of this kind. Individual users often assume that their network of friends is private whereas in reality it is a public virtual meeting place. This public nature has been much in evidence when Danish municipal governments check on the Facebook pages of social welfare recipients to make sure that they are not abusing the system. Telling your friends that your boyfriend is staying with you has been used as evidence to withdraw social payments for single mothers. Clearly, users should be more aware of the consequences of their actions when publishing their private affairs on Facebook.

Because of its large membership, in 2008 Facebook became a key forum for political communication. Public opinion in connection with the Democratic and Republican campaigns was first shaped and then discussed in different Facebook groups, Obama's more adeptly than McCain's.

Some small political organizations are using Facebook as a media channel to communicate with their suporters and collect donations for a given project or community support.

Business Model
The Facebook business model diagram presented below shows information flows (grey arrows) and revenue streams (black arrows) that we were able to identify. An explanation of each arrow follows (see the numerical label).

Generally speaking, there are two basic types of adverts on the site: conventional ads which companies can buy directly from Facebook and banners provided by Microsoft.

These can be bought directly on the Facebook webpage. Literally anyone who has a Facebook account can do this by following a few simple steps mentioned under "Advertising" on Facebook's portal:

- specify the address of the link you want the people to be directed to after clicking the ad;

- provide short text of the advertisement and the image;

- specify the price per click you are prepared to pay daily.

Not only can the advertisement be created by anyone, it can link to any website. There is no verification that you are the owner of the webpage you are linking to. This lack of verification was used in the 2008 U.S. presidential election by the liberal group MoveOn.org . They created advertisements which were critical of John McCain and Sarah Palin. They linked to the websites of the mainstream publications (usually Washington Post, the Associated Press and The Wall Street Journal) which informed about negative aspects of the policies of McCain and Palin.

Facebook has developed a mechanism called Beacon which tracks user behaviour. By gathering such information, more personalized and relevant advertisements can be presented to the users. In some countries, this is close to breaching privacy legislation.

Those needing sophisticated ads on Facebook pages can buy them from Microsoft, which is the exclusive provider of banner ads on Facebook, in return for investing 240 million dollars in Facebook.

In August 2008, Facebook launched Engagement ads. They are quite exclusive and only selected companies with well-known brands can take part. The ads look like widgets that can be added by a user on her home page (and therefore will be visible to friends). People can exchange opinions about specific products and add comments. This specific type of advertisement is more of a "brand builder" and it is said to create close (and more personalised) relationships between customers and specific brands.

Advertising indirectly generates revenues for brand owners through the increase in sales revenues that are thought to result from these ads. Money from ads is the main source of revenue for the company. There is, however, a huge mismatch between operating costs and advertising revenues. The estimated revenue for 2008 was USD 300 million according to Wikipedia, almost certainly far less than the operating costs of the portal itself.

Although offical, hard data is not available, it is thought that total annual revenue streams in 2008 were approximately USD 300 million. Apart from advertising, there were revenue streams from:

- "Facebook polls" (2.6): organization / party / anyone who is interested in getting some data about people's opinion can run a quick one-question survey. Paid per response.

- Application developers can earn money directly or indirectly from Facebook users who use their gadgets.

Facebook sends results of the survey poll to those who paid for them (1.8). Application developers create services and applications which are used on Facebook platform (1.6). Facebook needs to give appropriate tools and the API to the developers (with documentation) (1.7). Microsoft is "supplying" Facebook with the advertisement banners (1.5). Advertisers using Microsoft banners need to create the content for them (1.9). Advertisers create the advertisements (graphics, text) which are placed on Facebook sites (1.4). Facebook can also supply advertisers with some information (1.3). "Facebook Insights" is the service of statistics about activity, demographics and performance of the ads. Users send content to Facebook platform in different ways: photos, demographics data, friends, etc.

The transmission of data from Facebook to user is, of course, done with help of internet service providers who supply the users with their Internet connections (1.1, 1.2).

Conclusion
We have tried to piece together information about the Facebook business model using data from a multitude of official and informal sources, which means that we can only draw provisional inferences. The data on operational expenses (USD 200 million) seems to understate the true costs, given the size of the portal. It would appear to be at least an order of magnitude greater than that.

Our global assessment is that there are serious doubts about the efficacy of the conventional ads in this kind of general social media site, whereas the "widget-like" banners seem to show greater promise. The other revenue streams identified all make a small contribution to Facebook income.

Given the current economic climate, it will be interesting to see whether Facebook's backers will allow it to evolve into something that becomes a true money-spinner, or whether we are coming up to another crisis, esssentially a repeat of the Dot Com bubble that culminated in 2000 and burst in early 2001.
下载