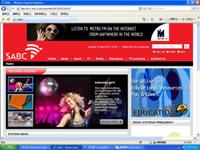 In the course of planning the next ‘Music Beyond Borders’ presentation, for the first time in the project’s 9 years, with the support of the Consulate General of the Republic of South Africa in Hong Kong, I was offered an opportunity to explore this nation’s cultural scene first hand.

RTHK Radio 4’s ‘Music Beyond Borders’ series is a project created to encourage cultural exchange. What began as a single live performance in RTHK’s Studio One, of music by an artist or group representing a particular nation, has grown to incorporate hours of cultural programming exploring all genres of the arts of a featured nation over one month.

The list of interviewees for this project grew to include personalities from the worlds of ballet and opera, screen and theatre, music, and one ‘professional observer’.

I spoke to one of South Africa’s noted trend analysts and social commentators, ‘professional observer’ Dion Chang, who shared his personal observations on some media trends in South Africa today.

Radio’s weight and going mobile
South Africa is a country of approximately 43.6 million. Radio is the medium that has the largest audience of about 29.5 million listeners nationally. Following the release of its first Radio Audience Measurement Survey (RAMS) for 2011, the South African Advertising Research Foundation (SAARF) states that radio continues to hold the interest of the majority of South Africans in the face of growing competition for people's time and attention. Saturday radio listening particularly is increasing, at 1.5% up on 2010.

Dion Chang: “The move into digital formats and to the internet exists in a very unequal society where not everyone has access to computers, let alone the internet, and this is where traditional media like radio is vitally important for reaching vast numbers of people.”

However, the population of South Africa is becoming increasingly urbanised, and as it does, it is embracing new technologies.

Dion Chang told me that while traditional radio is a strong medium, technology is leapfrogging past computers (making online radio listening possible) straight to cell phones. With broadband getting faster, it has been predicted that within the next ten years the majority of people in South Africa with access to limiting feature phones will migrate to all-embracing smartphones.

How will that impact radio?

Many of South Africa’s most popular radio stations are available online and for providers of streaming audio, the future lies in handheld devices. Usage will increase as apps improve, content increases and costs come down. This is particularly important because of mobile advertising. It is important here to know that the country's public service broadcaster, the South African Broadcasting Corporation (SABC), while wholly owned by the state, is financially independent of taxpayers' money deriving its income from advertising and license fees in a ratio of four to one.

The SABC's mandate is to provide both a commercial and public service, each administered separately, with commercial radio stations subsidising the public service stations. The corporation's commercial stations include 5FM, a national youth music station, Metro FM, a music station targeting black urban youth, and Channel Africa, an external radio service broadcasting in a number of languages across the continent.

Transformation for Television
Dion Chang: “The majority of the population is currently locked into the SABC and free-to-air television stations (distributed via digital satellite and analogue terrestrial). It used to be a small percentage of the population that could access satellite channels, but that is growing very fast. And these broadcasters are grappling with the notion of what is going to happen when broadband becomes more and more faster in South Africa.”

Digital migration is in progress for the country's broadcasting system from analogue to digital to enable broadcasters to have better capacity to improve and diversify their services. Other benefits include a large number of television channels that could be licensed, better video and sound quality and the transmission of an increased amount of data.

Dion Chang: “There is a cabal of service providers that won’t relinquish their hold on it, but it has got to come because the more you digitise any industry or any format, the more costs become negligible and there will come a point when the service providers can’t have a hold on it anymore.”

Consumers are expected to buy decoders for the change and South Africa is due to go fully digital in November 2011. The main challenge of implementing this strategy lies in balancing expansion of services to all South Africans, particularly the poor, with market growth and socio-economic development.

International Vs. National
Dion Chang: “Looking at the 20 something generation who grew up in an emerging South Africa that was coming out of apartheid, there is an interesting social dynamic. This generation grew up on American television since there was an Equity ban on television from the UK, and as a result, in terms of popular culture, grew up on hip-hop culture from America. Younger viewers are still referencing that kind of input, but at the same time there is a very strong drive towards local production and local relevance. For example, one of the biggest soaps in South Africa - ‘Generations’.”

Soaps have played a profound role in South Africa. ‘Egoli’, launched in 1992 - two years before the end of apartheid - was the first to show different races socialising. Issues such as HIV, domestic violence and clashes with black traditions were explored. The backdrop of ‘Generations’ is the advertising industry, with a storyline that celebrates the dreams and aspirations of South Africans. It boasts some of the best actors in the country. It is presented multi-lingually and is subtitled.

Dion Chang: “In putting out this sort of programming including indigenous languages (there are 11 official languages in South Africa) you will get a far bigger uptake for it, and this is happening now.”

Getting back to the Arts
Specifically for ‘Music Beyond Borders’, I asked Dion Chang to comment on the state of the arts in South Africa. “In terms of Classical music in South Africa there is a very strange but heartwarming revolution happening. Because of the political history of the country (apartheid era), Classical music was always seen as a very white, western, kind of a colonial art form, so 17 years down the line a strange thing has happened in that journey in that South Africa is producing some of the best opera singers, and coming out of the townships [refering to the often underdeveloped, urban living areas that until the end of apartheid, were reserved for non-whites] where this is not been the done thing, is (an interest in) ballet, which is not mainstream in South Africa, but is interesting people in Classical music. The explosion has specifically come in singing (opera). The sad thing is, that these fantastic voices that are coming out of South Africa will probably migrate and move to companies around the world.”

But Classical music seems there to stay. A programme of the SABC, ‘Your Choice’ recently released a compilation CD. In February, the ‘U Eie Keuse’ CD was sitting at No.1 on South Africa’s official top 20 on RSG; No.3 on Musica’s Top 20; and was in the Top 10 of just about any other music shop in the country. This was considered a truly amazing accomplishment considering that the content offered was Classical music.

For an in-depth look at the cultural landscape of South Africa, with a focus on Johannesburg, see www.rthk.hk/special/musicbeyondborders/southafrica2011 in May.
下载

Turkish Social Media and Its Impact on Democratization