"This study showed that telecommuting penetration among information workers in Hong Kong has ballooned by 22% over the last decade to nearly 25%. Drawing on the work/family border theory, the present study found that the more people use ICTs to work at home, the greater they perceive their work/family borders flexible and permeable. This highlighted the paradoxical role of communication technologies—it can be liberating and constraining, creating new possibilities for autonomy and invasion." 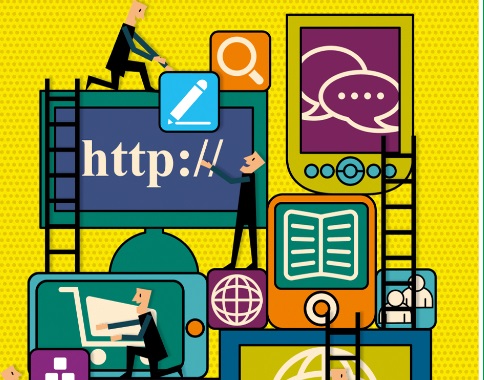 Telecommuting refers to a flexible work arrangement that allows employees, usually with the aid of information and communication technologies (ICTs), to perform their tasks in various locations, primarily at home. Telecommuting can be either full time or part time, with the latter prevailing in recent years. According to the Gallup’s Annual Work and Education Poll conducted in 2015, 37% of U.S. workers say they have telecommuted, up slightly from 30% last decade but four times greater than the 9% found in 1995. The poll also showed that average worker telecommutes two days per month and 46% of telecommuters do so during the workday.

Central to telecommuting practice is ICT use, whereby telecommuters interact with their central office and other colleagues. Studies on the effects of telecommuting and work-related ICT use at home, however, have yielded mixed results. Some scholars contended that the flexibility in scheduling individual tasks led to increased productivity, improved job satisfaction, and work-family balance. Yet others argued that the connectivity of communication technologies blurred the boundaries between work domain and home domain, inducing work-family conflict and negative cognitive responses such as stress and anxiety, which is termed "technostress." A phone call or WhatsApp message from one's boss or colleagues may orient an individual away from his or her families towards tasks at hand, leading to dissatisfaction of family members.

The mixed results were partly due to the fact that ICT use may not have a direct influence on individuals' work and family lives, but exert effects by altering the scope of activities and performance of duties in different domains. Previous research has found that role stress, triggered by role overload and role conflict, was the most significant cause of work-family conflict and technostress. Individuals find it hard to balance their work and family roles due to the excessive workload and intrusion of personal lives brought about by ICTs, which may result in job burnout, marriage breakdown, physical and mental health problems, and life dissatisfaction. Work/family border theory investigates the way people navigate the work and family domains and manage the borders between them in order to strike a balance.

According to the theory, the borders between work and family domains are primarily characterized by their permeability and flexibility. Permeability refers to the extent to which the boundary between work and family allows the psychological or behavioral aspects of one domain to enter another. Flexibility indicates the extent to which a domain may contract or expand to accommodate the demands of another domain. In fact, flexibility involves the malleability of the boundary between two or more role domains (e.g., the ability of a role domain such as professor to expand or contract to accommodate the demand of another role domain such as parent, and vice versa). When the work/family border is flexible, individuals tend to have more freedom in choosing their work hours and locations. When the borders are flexible and permeable, they are blended, leading to the integration of work life and family life.

Leung (2004) surveyed 623 information workers in Hong Kong and found that less than 3% were teleworkers, partly due to the low Internet adoption rate at that time. Ten years later, however, the penetration of mobile phones (2.5G and 3G/4G) and household broadband has grown, according to Hong Kong Communications Authority in 2015, to 228.8% and 83.2% respectively, providing a different scenario of telework practice in Hong Kong.

Although role stress and reliance on technology have been identified as the primary antecedents of work-family conflict and technostress, the mechanism through which ICTs exert impacts on work-family interface is largely unknown. Drawing on the work/family border theory, this study (1) delineates the status quo of telecommuting practices in Hong Kong and (2) investigates the role of work-related ICT use in shaping the characteristics of work/family border—flexibility and permeability—and its subsequent impact on individuals' perceived work-family conflict and technostress.

The data were collected via a telephone survey from a probability sample of 509 information workers aged 18 years or older in March-April 2015. The participants were those who had jobs that required the use of a computer to accomplish the tasks of their work and were not self-employed. The response rate was 50%. The sample consisted 46.8% male and 53.2% female. The median age was 40–49 years, and 58.1% of them were married. The median monthly household income was in the range of HKD 20,000 and HKD 24,999 and 55.2% graduated with a bachelor's degree or higher.

Eight types of ICTs were employed to assess the level of work-related ICT used at home. The eight ICTs included: 1) personal computer; 2) facsimile machine, copier, or scanner; 3) e-mail; 4) instant messaging such as WhatsApp and WeChat; 5) intranet provided by the company; 6) cloud storage using Dropbox and/or Google Drive; 7) social media such as Facebook; and 8) search information on the World-Wide-Web.

As shown in Figure 1, the penetration of telecommuting among information workers in Hong Kong was 24.8% (specifically those who admitted that they work at least one day or more a week at home). Compared to a similar study conducted over 10 years ago when only 3% of information workers considered themselves teleworkers (Leung, 2004), this figure has increased dramatically. Of all the telecommuters, 37.3% telecommuted one day a week, 26.2% two days a week, and 36.6% telecommuted three days or more a week away from the office (see Figure 2). In terms of who telecommute, the study found that 22.6% of the telecommuters were managers or administrators, 18.8% were professionals (such as lawyers, computer programs, accountants, and designers), and 28.9% were assistants of professionals (such as paralegal and nurses). 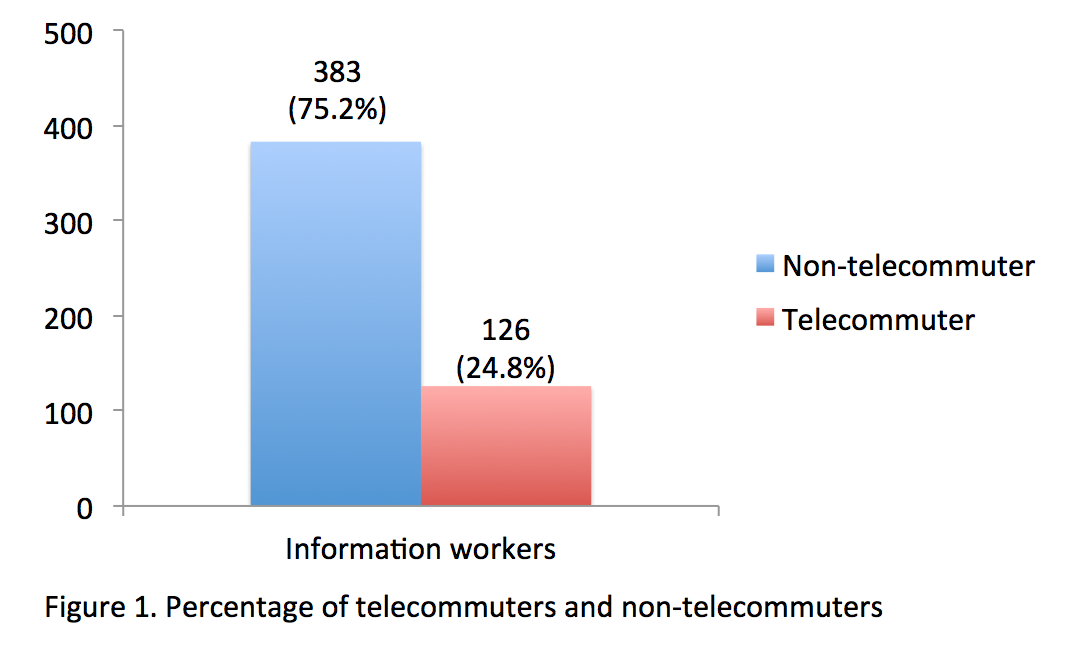 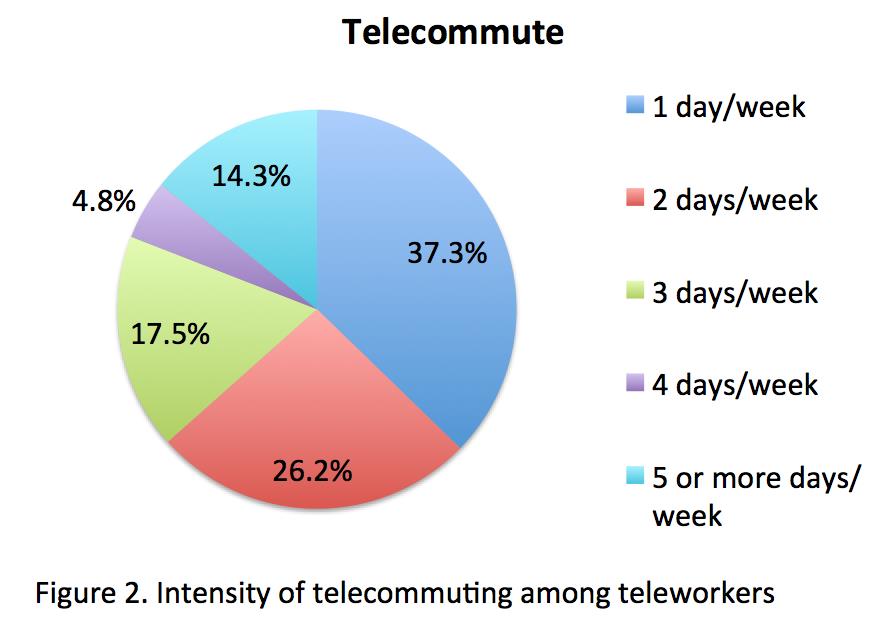 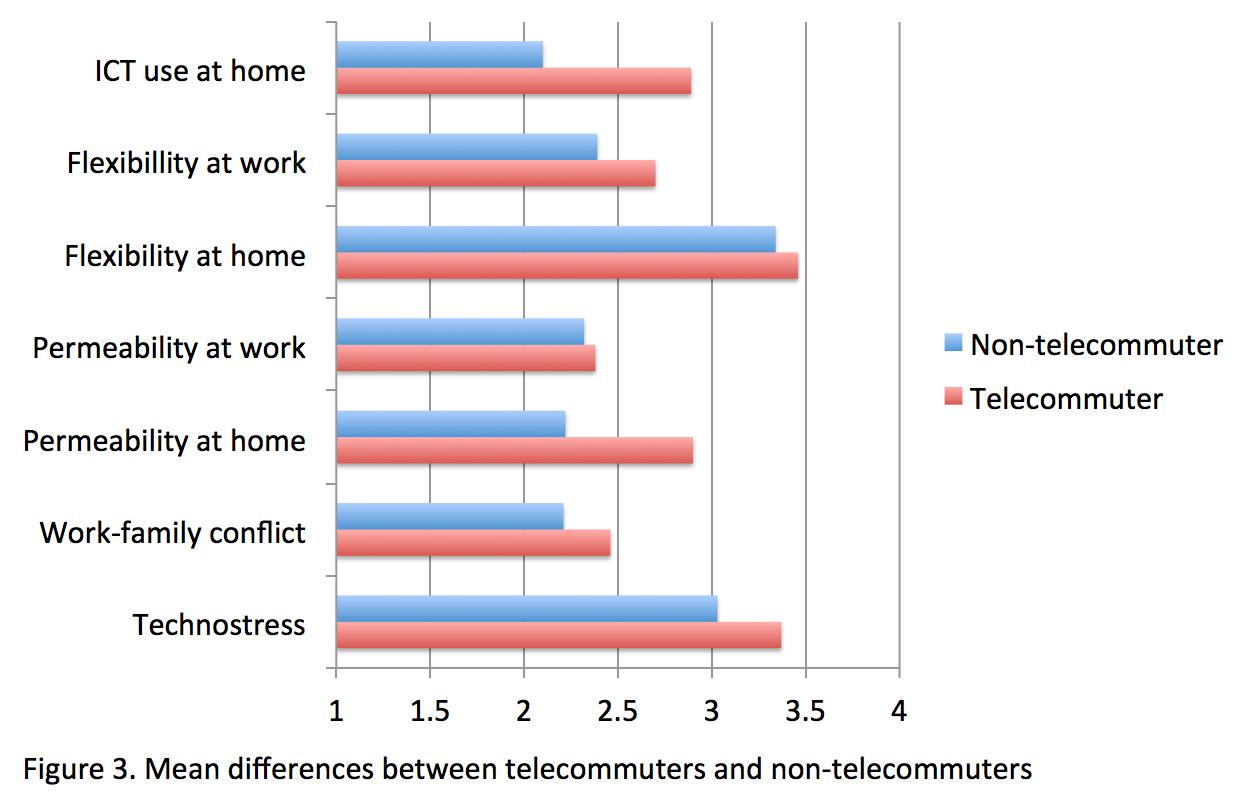 Effects of work-related ICT use at home

We also explored how work-related ICT use at home influenced the characteristics of work/family border. As shown in Figure 4, people who often use ICTs to work at home exhibited higher flexibility and permeability at work and home domains than those with lower levels of ICT use at home. It is important to note that the effect of ICT use at home on permeability at home domain was much stronger than that on other variables, suggesting that employing ICTs to work at home largely contributed to individuals’ perceived permeability of the border around home domain, leading to increased work-family conflict and technostress. 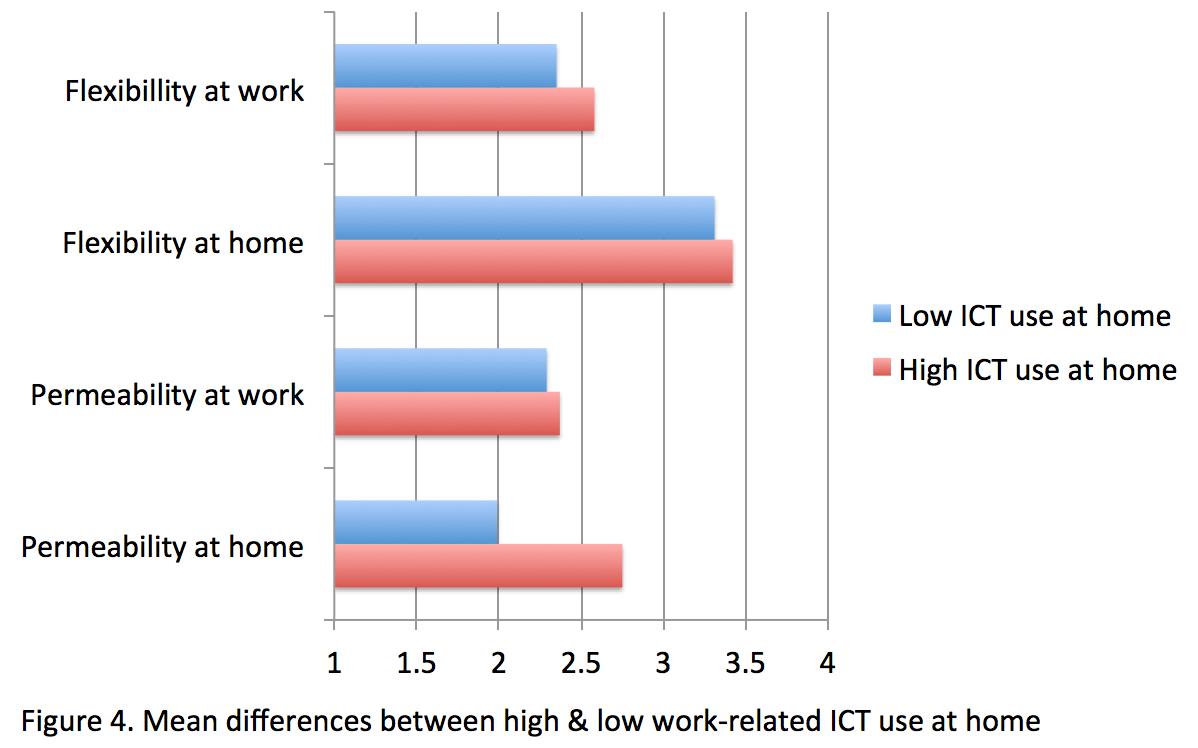 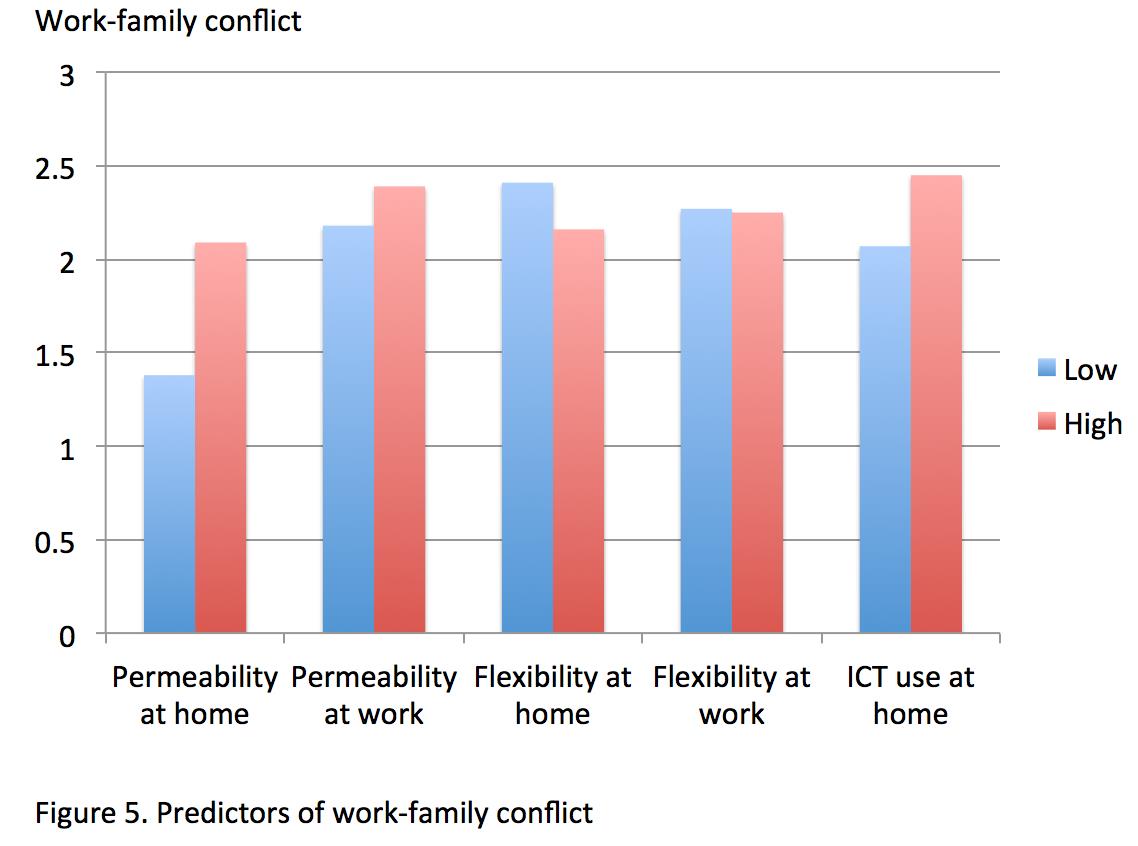 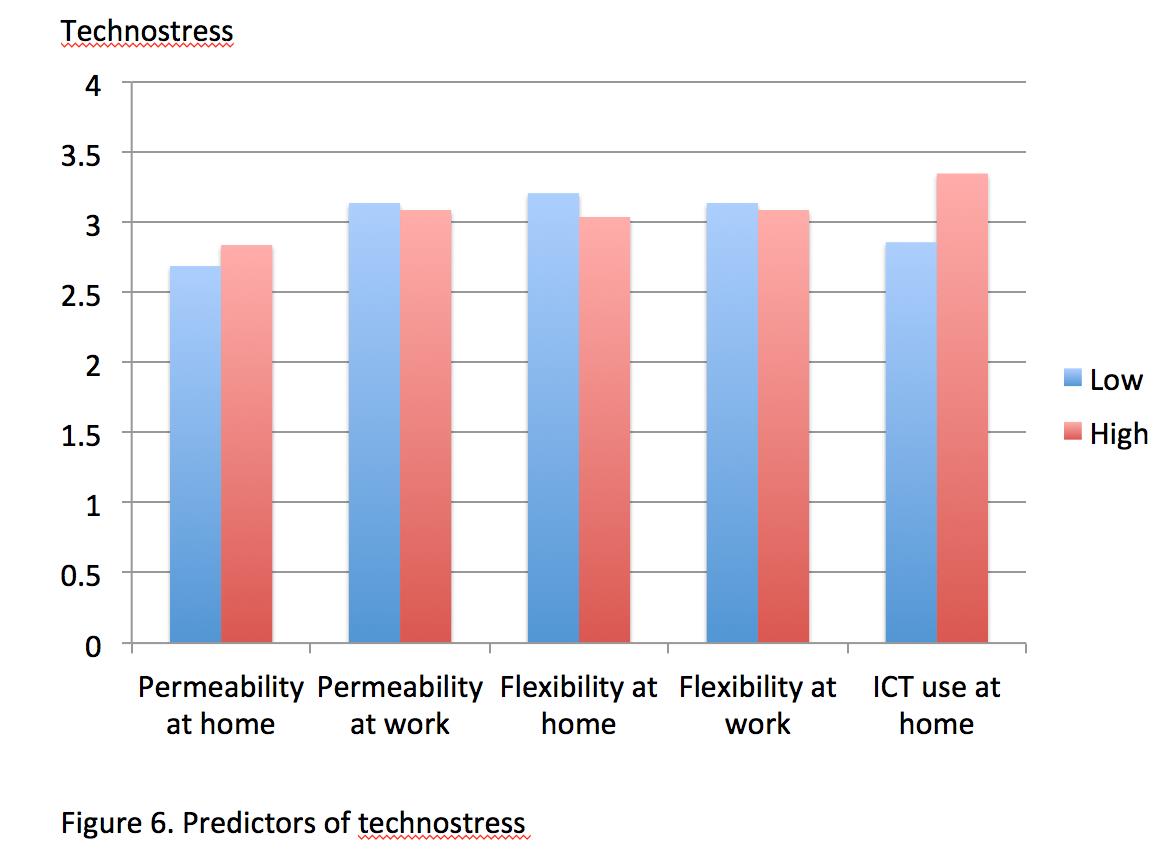 This study showed that telecommuting penetration among information workers in Hong Kong has ballooned by 22% over the last decade to nearly 25%. Drawing on the work/family border theory, the present study found that the more people use ICTs to work at home, the greater they perceive their work/family borders flexible and permeable. This highlighted the paradoxical role of communication technologies—it can be liberating and constraining, creating new possibilities for autonomy and invasion. The results also suggested that low flexibility and high permeability of work/family borders, rather than ICT use at home, had much stronger influences on increasing work-family conflict and technostress. Thus, it is the individuals' control over what passes through the work-home boundary that determines the effects of ICT use on their work and family lives.

We also investigated the process by which technostress take place. The results suggested that both ICT use at home and permeability at home contributed to technostress, while higher flexibility at both work and home domains reduced technostress. Interestingly, lower levels of technostress were found among individuals with higher permeability at work, suggesting that a permeable border around the work domain helps to mitigate stress. Probably a liberal corporate culture that allows employees to deal with family concerns while they are at work helps counteract the stress and anxiety caused by ever-evolving information technologies. Therefore, technostress may be lessened by flexible corporate policies that allow employees to arrange their work and deal with family concerns autonomously.