For five months I worked for Facebook.  Specifically I was a freelance web curator for Facebook's news app called "Paper." The word curator was a curiosity. I associated it with museum exhibits but not the news industry.

The irony I always thought was that I was a print journalist for nearly 20 years when I had stumbled into the project. It was wonderful and accidental. I knew little about curation before that and learned a lot in the process. I worked with some really smart folks, who on a whole and ironically, were professional editors and journalists, many of whom had significant experience and came from the world of prestigious print publications such as The New York Times and Reuters.

We were hired to choose news stories that were posted on Facebook and place them into different news channels on the app. It was a bit like laying out a digital newspaper. We were being paid for our judgment and nose for news, and served as filters for readers who are increasingly being hit by a barrage of information in a 24-7 news cycle. 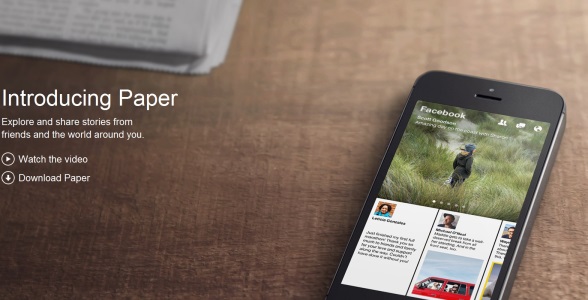 The "Paper" was an awesome project, but it also ignited a flurry of new questions I had about journalism as a profession, namely if these new technologies and ways of delivering news was in fact journalism? The more that I engaged in curation the more that I saw the symbiotic relationship between the old and the new. New channels and platforms such as Facebook needed consistent content from news outlets, after all Facebook doesn't have its own reporters.

At least with "the Paper" there was an emphasis on publishing high quality pieces from sources such as The Atlantic, The Wall Street Journal, Bloomberg, Forbes and yes the ultimate north star, The New York Times, and they were solely using stories that were already posted on their platform.

The project also triggered a memory of my visit to Smartone, the cell phone provider, more than two years ago. I visited the newsroom within the company, and marveled that the editors working for Smartone had been recruited from top news organizations such as Ming Pao and the Hong Kong Economic Journal. Smartone's editors followed the top stories by keeping a close eye on the major news sources, aggregated the news following the lead of top news sources, and rewrote the headlines and leads under their own auspices. A cell phone company that housed a newsroom, very novel, I thought.

Two years later what was then novel is now increasingly becoming part of the norm in the news industry. Traditional news outlets are moving into the direction of aggregating and repackaging information. There is also the growing business and popularity of news aggregation by companies such as BuzzFeed and Upworthy, which have been relatively successful in gaining views. Such success also opens up room for debate as to what is news. Is journalism changing or dying a slow death?

Gannett Co., the largest newspaper publisher in the United States, recently completed a major reorganization where they re-interviewed every staff member in the newsroom. New titles and duties were given journalists and editors, including story telling coach and web curator. According to management at Gannett, reporters will have more control as they will be expected to drive their own story coverage, and many stories may not even go through an edit. Reporters will also be reviewed based on the number of page views and "shares" their stories garner. In other words reporters may be judged on how popular their stories are. Many of my friends, seasoned journalists who have been in the industry for a dozen years or more, describe the new system as a popularity contest (journalists will need to tap into their personal networks to achieve more "likes" and "shares.") The criteria for merit might morph and change over time for better or for worse. Is it terrible? Maybe, maybe not.

After straddling both journalistic universes of old and new, I agree that journalism is changing but whether it is dying remains to be concluded. Moreover, both the old and the new are needed in order for the industry to succeed. In other words news ventures such as "Paper" could not survive without the rich content from top journalism venues such as The New York Times, CNN, BBC, The Guardian or The Wall Street Journal. Conversely news organizations reap the benefits of more readers when their content is reshared and reposted on social media platforms or through apps such as "Paper" or "Flipboard." Readers also have many more ways to receive their news and information. For now there appears to be a win-win situation here, or maybe I'm just being an optimist.

*Amy WU is a research assistant and PhD student at the Merrill College of Journalism, University of Maryland. She has 20 years of experience working as a reporter at publications including Time magazine, The Deal LLC and the Rochester Democrat & Chronicle.

Radio and Social Media :Where to next