Junhao Hong / Professor of Communication at the State Univesity of New York at Buffalo, U.S.A.

Radio and television in Turkey constitute the focal point of technologic, legal ,  cultural ,economic and political discussion. They are also considered as a power and supervision tool by those ones in the country who manage societies, political and commercial power groups and media researchers.[1] Especially, TV has been viewed as the most effective tool of media in the Turkish land[2].  Such functions of broadcast media can serve as a channel for projecting the political views of the public.[3]

The effect of broadcast media on the public intensifies as a result of developments in communication media and technologies, and whether these developments support democratic practices, whether the government puts pressure on broadcast media and whether broadcast media is a force for the good of the public are subjects wildly debated in Turkey. Nevertheless, Turkey's European Union membership process has brought important regulations to Turkish broadcast media sector. The effect and benefit of European Union Harmonization Laws on national law in the context of these regulations have supported Turkish broadcast media sector's great advancement on audio and visual policies. With the changes made in the Law, Turkey has made progress on subjects such as providing freedom of speech, removing retransmission prohibition, the ability of Turkish citizens to broadcast in various languages and dialects they traditionally use in their daily lives, rules of the Supreme Board of Radio and Television in accordance with European Union norms taking effect, prevention of promotion of violence and discrimination against women and children and intellectual products and art. However, while these advances have occurred, discussions have not ended. Meanwhile, as a public service broadcaster, Turkish Radio and Television (TRT)'s autonomy and objectivity is granted by constitution.

The Role of Public Broadcast Media

Presently, Turkey has a broadcast media sector which includes 263 television channels and 1,058 radio stations, and the broadcast media sector is growing each day.[5] As the most important Turkish public broadcaster, TRT broadcasts to Turkey and the outside world in 35 languages and dialects with 15 television channels, 7 national, 6 regional and 5 international radio channels, plus the online broadcasting via trt.net.tr , trt.world.com and telex, along with publishing "TeleVİZYON", "TRT Çocuk" and "TRT Haber DD" magazines.[6] The government uses TRT for clearing negative attitudes regarding Turkey, promoting cultural and religious values, and creating a positive appearance with regards to execution of democratic steps and public diplomacy programs. The government's influence on the public broadcast media is both obvious and enormous.

When Turkish public broadcast media was founded, they were firstly based on supporting all the efforts of the country. The public broadcasting has been undertaking an effective role in conveying national values to society and has been continuously aiming integration between government and society.  It has been functioning to reinforce communication and the state's attitudes towards broadcasting and cultural development. It also has been aiming to reach all demographic groups. The public broadcast media has been trying to direct target groups with planned manner for taking decisions to go into action, to perform the supervision and guidance task of the state, and to legitimate the cultural realities and control the society to a certain extent.

Turkish public broadcast media also is to help state clear up foreign politics in the state's practice. The latest channels of TRT targeting neighboring regions can be seen as an important broadcast media activity carried out by the government. TRT-6, TRT-Arapça (TRT-Arabic) and TRT-Avaz channels all started broadcasting for this purpose. The government uses these television channels to create a positive perception of the nation and emphasis on the cultural, religious and common values in the region. For instance, being the first TV channel that broadcast with different languages and dialects, TRT-6 is to contribute to Turkey’s international relationships with its neighboring countries,[7] and is particularly used as a broadcast media source in response to the propaganda war of PKK, a terrorist organization. Delivering soft messages regarding Turkey's cultural richness, this channel also aims to break the effects of the broadcast of Roj TV, the media organ of PKK. Thus, TRT-6 serves as an important tool in Turkey's strategic communication with Kurds, as well as serves as an important freedom-security balance application with which Turkey uses information regarding domestic and foreign policies effectively.

Another Turkish channel that also targets its neighboring countries is TRT-Arapça, whose broadcasts target 22 Arabic countries with an attempt to make a positive contribution to Turkey's international relationships and to strengthen the bond between Turkey and Arabic countries.  Moreover, TRT-Avaz started broadcasting to the Turkic world in 2009. It covers a wide area from Far East to Balkans, including Uzbekistan, Kazakhstan, Kyrgyzstan, Turkmenistan, Azerbaijan, Bosnia Herzegovina, and Albania, for a total of 8 countries with 8 languages native to those countries, aiming to create a unity of thinking between Turkey and other Turkic Republics.  This channel appeals to a geography of approximately 250 million in 27 countries and 13 autonomous Republics from Middle East to Caucasus.[8]  Founded with the Turkic world in mind, TRT-Avaz has been designed to shape and appeal target demographic with cultural codes and represents both the traditional and modern Turkey.

In addition to public television services, Turkey also uses public radio services to influence both domestic and foreign public opinions. As of today, Turkey has three major public radio broadcast services, including Radyo-6, Türkiye’nin Sesi Radyosu (Voice of Turkey) and TRT Avrupa FM (TRT Europe FM). Radyo-6 targets Kurds living within Turkey's borders, aiming to contribute to Turkey's unity and integrity, strengthen the bond of regional citizens, and have a positive contribution to Turkey's foreign relations as well.[9] Another radio created by the government is Türkiye'nin Sesi Radyosu, which broadcasts in 34 languages news, talk shows on 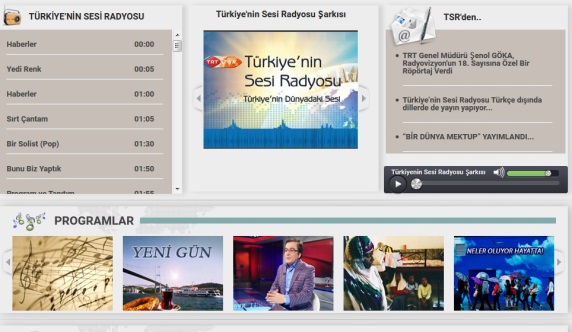 various subjects and mixed music. Its target audiences are people living abroad. Broadcasting 24 hours a day, the radio reflects Turkey's view on various domestic and foreign issues and promotes the image of Turkey.[10] In the meantime, short wave transmitters of Türkiye'nin Sesi Radyosu, the Voice of Turkey, broadcasts to the whole world via satellite and the Internet. Meanwhile, the purpose of TRT Avrupa FM is to broadcast to Turks about Turkish culture and policies.[11] Together, these state television and radio services serve as a systematic and effective tool for Turkey to form close relations with Kurds inside the country and Arabs and kin Turks living in the region.

The Controversies about Private Broadcast Media

The world has seen big private broadcast media organizations grow, and this trend has led to the fear that a few media organizations will increasingly control communication and media and they will affect public opinions, national agenda, democratization and global culture. [12]  & [13] These and similar worries also apply to Turkey. Turkish private broadcast media is generally in the hands of investors. Investment groups are the owners of Turkey's foremost media organizations, and media organizations often change hands among those groups. In recent years, while a tension has been growing between those who hold the power and those who don't,[14] in Turkey this kind of tension is even higher.[15] For example, using the environment of freedom granted by democracy, the media should be a mechanism that holds the government responsible to people and an observer above the government.[16] However, the Turkish private broadcast media is failing to discharge those responsibilities. For another example, the less media owners there are, the more potential political power there is.[17] This scenario also has been seen in Turkey too.

The political power of private media organizations in Turkey is based on the economic and political interests of the ruling political party and other political organizations. Thus, one of the most important issues in Turkey is the association formed based on ideological similarities between political organizations and the media. Media organizations in Turkey rarely present different political views equally and do not respect the principles of political bipartisanship. As a result, different groups are not able to show presence in the media equally and objectively. Particularly, Turkish private broadcast media has already become the primary transmitter of messages and plays the biggest role in shaping target masses, yet it plays this role far away from bipartisanship. Instead, owners of the private broadcast media often disregard the principle of political bipartisanship and ignore democratic processes whenever they like.

As a result, the private broadcast media prevents people from learning the truth, thus being unable to satisfy the role it has undertaken on behalf of the public. Today, access to information, learning the truth and expressing one's ideas via the media is among the basic rights and freedoms of the people.  The private broadcast media in turkey has failed to serve and promote the public's basic rights. In other words, Turkish private broadcast media has not performed a civil supervision task. Rather, it functions basically as a tool for political and economic interests of certain power groups of the country. Because of these, it actually produces a negative effect on the democratization of the nation.

Media in Turkey has become one of the dominant powers with which other organizations must keep up, and also, the whole political process largely depends on the media logic.[18] & [19] The current broadcast media in Turkey cannot be effective to form a more democratic and civic society. On one hand, the technologically very advanced public broadcast media services are basically used by the government to promote the international image of the nation and to serve as a tool for public diplomacy. And on the other hand, the quickly growing and powerful private broadcast media services are not doing a good job for the society and the public. Instead of providing equality of opportunities and serving as a defender of human rights, unfortunately, most of the private broadcast media in the country induces people to violence terror and ethnical discrimination, provokes hostility with respect to class, race, religion, language, sectarian, etc., thus failing to making a contribution to the social change in the nation, particularly to the political transformation and democratization. All these may suggest that there is a big room for improvement is waited for the broadcast media in Turkey to truly represent and reflect the public's interests, though fulfilling this task may need various kinds of challenging and enduring efforts.

Turkish Social Media and Its Impact on Democratization