Radio and Social Media :Where to next 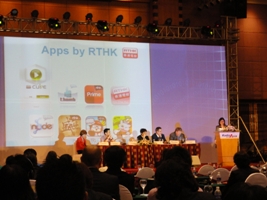 The RadioAsia2013 was held in Hanoi, Vietnam from 29-31 July under the theme of "Radio and Social Media: Where to next". There were over 500 radio broadcasters and other players in the radio industry joining hands to share their working experience and on how to keep pace with current trends of social networking platforms and better content to keep radio sustainable and influential.

Some highlights here were taken from the conference - first of all, the importance of social media; secondly, the new trend of “Radio on the move”; thirdly, embracing our younger audience for our radio’s industry future; fourthly, don’t forget the core value of radio is still CONTENT, CONTENT and CONTENT.

Importance of Social Media
In the conference, we all agreed that radio is not old-fashioned. It has evolved with social media. Broadcasters use Facebook, twitter, and weibo to interact with our users, engage them and at the end publicize our works on different social media platforms. It has really become part of our radio presenters/producers’ routine to work on social media platforms. Speakers quoted different figures to show how popular social media is, say daily active users of Facebook are 699 million and registered accounts of weibo over 500 million. They also stated that we must engage in social media, because it’s where the audience is.

Mr. Takanobu Tanaka, a representative from NHK, Japan revealed that they are trying their best to improve the use of social media to fill in the so called “black hole” of what’s really going on in disasters. They wanted to get the latest news and reports from victims and related parties on that affected area. Other speakers also urged some seasoned broadcasters to value the social media. Joan Warner from CRA Australia said, “We must not see social media as a threat, but opportunities to connect with audience, particularly the young people.”

Steve Ahern from Ahern Media and Training said, “As a broadcaster, we need to teach our audience how to use social media so that they can communicate with us in a better and effective way.” He even suggested running a radio show on this. Mr Ahern also said that the impact of improved use of new media would include wider online followings, increased ratings, hyper-personalised engagement.

Concerns of Social Media in Radio Broadcasting
Assistant Professor Bradley Freeman, from Nanyang Technological University suggested that social media is another kind of citizen journalism as listeners are taking on the role of citizen journalists by texting, tweeting and uploading photographs to broadcasting organisations, newspapers and social media sites such as Facebook and YouTube. More and more radio broadcasters are relying on these news content sources. But how can we prove its adequacy and credibility? And not to mention the sources may also be well- shared by your competitors. Speaker Steve Ahern stated that content matters on social media. “When we do social media, we should try to find a quote or attribution from authorized personality.”

As professional broadcasters, we always have to verify the source before we publish it. To keep tracks of the content, Mr. Ahern suggested applying social media dashboards like Hootsuite, Tweet Deck and Visible Tweets to monitor comments and engage with our users from different social media. Anyhow, we need to be very careful when dealing with content.

"Radio on the movie"
The latest trend - "Radio on the movie" is largely due to the popularity of smartphones. Radio audiences are now turning to mobile devices to access to radio when they want it and where they want it. According to a late report by GSMA, mobile subscribers are growing four times faster than the global population. And in 2014, mobile subscription will pass seven billion. Smartphone penetration will be 75% in 2015.

Simon Kendall from BBC World Service said the big challenge to broadcasters is how to turn audio to all mobile. He quoted a recent survey saying about 80% of BBC listeners now have smartphones or similar devices, requiring broadcasters to provide value added services such as audios or visuals.

According to a RTHK web report in October 2012, apps streaming was taking 43% in video entrance distribution and the daily "Live Streaming Hits" from mobile streaming for live radio also increased to 30% compared with the previous month. And the download rate of RTHK’s Apps “RTHK On The Go”, where listeners can enjoy RTHK radio live on mobiles plus latest news and amazing podcasts, is now over one million.

As we observe from our surroundings, more and more people are using their smartphones on their way. Therefore, this new “Radio-on-the-move” trend is a great opportunity for broadcasters to engage with an important and significant segment of listeners and viewers too.

Embrace young generations
Jeff Cohen, Director of Development of WRN Broadcast, reminded us that maintaining youth audience is essential for survival of radio. A great challenge for media organizations is to judge the needs of young people as today’s generation expectations are very different from 10 or 20 years ago. They prefer using internet for social entertainment. It has also changed the way music is listened to. We have to understand that it’s really hard to get loyalty from them.

Jeff Cohen quoted from Tim Parfitt, former Controller of BBC Radio 1, saying, "If Radio 1 is to reach the nation's youth - 80 per cent of whom now have a smartphone or similar device - it needs to think in pictures as well as Radio.” And “Radio 1 is not just a radio station, … it can comfortably exist as a YouTube Channel, as an event, as an app or as a stream to your mobile device. It shouldn't be locked into this idea that it's just a radio Station.”

Speakers from Singapore and Malaysia also showed us that they have produced a lot of interviews with celebrities and entertainment segments inside and outside of the studio in video format. They believed the young audiences are not satisfied with only audio presentation, but with more like text, pictures, video and even something more from radio stations.

Mark Collier of Australian Film Television and Radio School said because of the challenge brought by technology, broadcasters should be very innovative and may consider getting new talents for content creation.

Radio gives us hearing enjoyment, but now, we need to stop and think – can we give more?

Content is still the King
Last but not least, we heard from different speakers saying the content is still the king in this digital world. With an estimated 44,000 radio stations in operation worldwide, radio is one of the most accessible forms of technology, covering 70% of the world’s population.

No matter how popular the social media is, how big the mobile market and how hot the radio apps, we must bear in mind that the fundamental and essential of a good quality radio show is content. We must create rich, relevant and local content to our listeners.

Radio Advertising
Radio advertising has become a powerful tool. Advertisers are attracted to radio because of its immediacy, extensive reach and relative low cost. Up to June 2013, advertisers spent AUS$683 million in radio advertising in Australia and have increased 0.4 % compared to previous year. Australian expert Jason Malaure from All in Media told us the radio business with mobile phones evolving very fast. However the banner advertisement (i.e. pre-roll, in-stream and co-branding etc.) is still the focus. And they tried to create synchronizing banners to the live audio and make personalized ad with reference to the users’ age, location and gender. Nevertheless, radio faces challenges from an ever-expanding plethora of media options. Mr Malaure said they faced hurdles like “It’s a radio apps, sometimes people listen but don’t watch”, and also the problem of inconsistent audience measurement and potential conflicts between displaying ads and radio.

In conclusion, radio must continue to adapt to be like “liquid”, which means more flexible and adaptable to change. To begin with, we need to ask ourselves where our audiences are. We all should keep learning and look for trends, and value staff who see the big picture.
下载