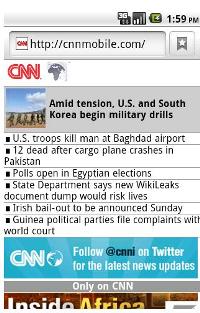 Not too long ago a General Manager at a major television network station said to me, “The day we tell our TV viewers to go online instead of watching our news telecasts on TV, is the day our business is finished.”

Since the invention of television, major broadcast media companies have enjoyed consistently high profit margins with a fairly simple and unchallenged business model. That model was focused on producing and distributing high quality content to a captured audience of millions through essentially one technology device. And revenues came from essentially one source: advertisers.

Throughout my career in broadcast television and digital media, I’ve tried to convey to my colleagues one thing: Content will always be King but new emerging technologies must also be embraced. They are the critical components for delivering great content to a now, very different consumer; a consumer that is mobile, has more control and possess a strong power of influence.

Today, while consumer demand is at its highest level for new technologies such as DVR’s, iPads, Internet connected set top boxes and social media networks; television, as we once knew it, faces very sobering, fundamental challenges that will change their business model forever.

With change comes opportunity
The combination of great content, strategic marketing and promotion, mass audiences and viral water-cooler talk has always been the perfect storm for a successful bottom line in media.

But producing great content doesn’t come without cost. Whether its fees for the rights to major sporting events, talent fees for drama, production costs or marketing and distribution fees, producing great content is expensive. And since broadcasters continue to spend significant amounts of money on quality content, they have the unique opportunity to innovate and drive new business models for this new media industry.

Despite that station General Manager’s reluctance to change, over the next few years, as the marketplace began to recognize the groundswell of consumer demand, and his staff began to embrace these changes, his station reinvented itself, knocking down barriers they even thought were impossible.

They began breaking news video on the web, on mobile devices, as they happened, even before airing it on television. They began to build a whole new digitally connected audience of young, active mobile consumers who might have never watched their local news on their televisions.

This was a defining moment for many of the TV stations across the U.S. Not only did all of the network’s station begin establishing new relationships with emerging digital ad agencies, tech savvy marketers, and new digital content distribution companies, they more than doubled their digital audiences and revenues year over year. Substantive alternative revenue streams for their content were becoming a reality.

But were millions of dollars in digital revenues substantive enough when their core business was generating billions?

For the TV business as a whole, as long as television’s revenue pie was significantly dominated by traditional advertising methods and audience measuring, the motivation to change, to keep up with evolving technologies and totally embrace the emerging online business, would struggle to be a recognized priority. And in turn, there’s been less patience for incubation of new business models creating high revenue expectations without regard to consumer experiences.

But consumers’ access to content is now virtually everywhere. Netflix, Hulu Plus, iTunes, You Tube and even cable distributors and programmers are streaming content over the web for consumption on all types of static and mobile media devices. More importantly, consumer experiences with this content have begun to change. The old ‘passive experience’ has now become more interactive, more social and engaging for consumers.

The foundations of companies like Apple, Google, and Facebook have been based on consumer experience and opinions. Content providers can no longer disregard consumers and their power of influence. Marketers and advertisers certainly haven’t.

According to research firm eMarketer, marketers spent $25.8 billion on Internet ads last year, up 15% from the previous year and the Internet ad market is expected to grow 11% this year to $28.5 billion. Although search is still the leader with 45% of the pie, display, streaming video and sponsorship advertising has grown significantly.

And according to research from the Consumer Electronics Association, about 10% of pay-TV households are planning to cancel their cable, satellite or telco TV service this year, and turning to Internet sources of content, not over-the-air broadcasts.

Critical shift taking place
With the explosive growth in mobile digital media devices and the white-hot social media phenomena, a terrific opportunity is beginning to emerge for high-quality content providers.

A recent Nielsen study on the relationship between content and social media reveal that 53% of time spent on the Internet is directly attributable to content consumption, and nearly one-quarter of all social media messages contain links to content.

The New York Times recently reported that Facebook CEO Mark Zuckerberg is seeking to link new and existing media companies’ platforms — including Netflix — to its 700 million global user base.

With new, easier-to-use technologies, the more control consumers are given, the more demand there seems to be for information and content. This shift in control by consumers and their immediate access to free, subscription based, and in many cases, ad supported content, has made traditional strategies, distribution, relationships and metrics less useful, and in some cases, irrelevant.

And although metrics are still not clear nor standardized for the digital media platforms, audience fragmentation is creating a groundswell of excitement in the media industry with investments, experimentation and strong alliances from all sides of the industry trying to find, create and most important, define the value.

Today, there’s a critical shift taking place from the old mass reach and brand advertising approach of traditional television to targeting and engaging consumers, generating real-time data and establishing a direct relationship with the consumer. Although metrics are far from clear or standardized, there’s an upsurge of interest, experimentation and strong alliances from all sides of the industry to help find and create methods of more accurate data.

Marketers can not only have a direct connection with consumers but consumers now have enormous power to reshape and distribute marketing messages through these global communities and, most effectively, at lightening speed. And if content can continue to be the common thread of connection between consumers within the social media forums, the opportunities that lie ahead for great quality content owners are exponential.

The power of influence is alive and growing within the social media forums around the globe. While Twitter and Facebook keep people informed and connected, they can also immerse you right into an event, into what’s going on, at that moment, in real time, as if you are a participant, without filters.

Marketers are shifting higher budget allocations to digital media each and every year. And broadcasters are finally beginning to partner with marketers, digital agencies, researchers and technology developers to help drive some of these initiatives as innovators and not followers.

With television still the most powerful medium in the world, content providers must recognize the new, empowered consumer; a consumer that is in control, wants to be connected to information and content that matters, that’s relevant to their lives and they are highly influenced by the opinions of their peers.

And while quality content is always going to be expensive to produce, both marketers and consumers will absolutely be willing to pay for it.


* Former President, Digital Media at CBS Television and Senior Vice President at Disney/ABC Television where he successfully created, built and managed profitable multi-platform and multi-media businesses for both media companies. He is currently President of DoubleVision Media,a media consulting firm based in New York.
下载