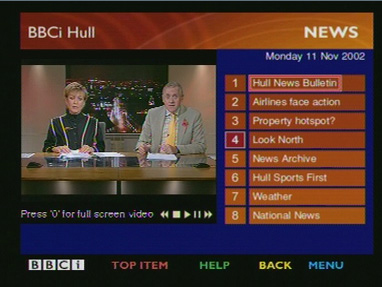 BBCi Hull Life pioneers in broadband interactive television service.
This article is designed to give a brief overview of the services and working practices of journalists involved in the British Broadcasting Corporation's east Yorkshire and northern Lincolnshire operation.The region, centred on the city of Hull, is pioneering new working methods and producing innovative content across television, radio, the internet and the world's first interactive broadband television project.

Located in northern England, the region is one of the biggest areas in the UK. It covers the rural East Yorkshire and Lincolnshire countryside and coast, as well as the urban areas of Hull, Scunthorpe and Grimsby. The area has a population of nearly 1 million people. The main industries are farming, food processing, education, manufacturing and tourism.

All services are run from the same building in the centre of Hull with an integrated editorial and management structure and combined production facilities for all parts of the operation.

Due to a quirk of history, the city of Hull's telephone system was never nationalised by the government in the 1920s. This left Hull as the UK's only telephone network still owned and operated by the local council. This independence has led to the local phone company, Kingston Communications, developing one of the world's most advanced telecommunications networks. The entire city has access to cheap broadband connections and some innovative locally produced content.

Chief amongst these is the Kingston Interactive Television service (KIT). It allows subscribers access to around 90 television and radio channels sent via their phone lines to a set top box connected to the television. Because it is delivered by broadband, it has a return path which makes it a truly interactive service, because it allows viewers to forward information back to the broadcaster. Subscribers can access video on demand, which means they can play, pause, rewind and fast forward by means of a remote control.

Because of its commitment to local programming and technical innovation, the BBC have seized this opportunity to develop the world's first broadband interactive television service. KIT users get access to a section called BBCi Hull Life consisting of news, sport, entertainment, features and education. The service is video driven with viewers selecting video clips from a menu of onscreen items.

One of the most successful areas is the education and learning section. In line with the BBC's public service commitment, a partnership was formed with the city council and local schools and colleges to form a learning zone. The BBC produces interactive material on the KIT platform for all age ranges. Much of the content is tied into the national curriculum allowing pupils to follow coursework both in school and at home via the KIT system.

The whole service is proving extremely popular in the city and the project is being used by the BBC nationally as a test bed for interactive programming.

The BBCi Humber website is part of a network of local sites based in the BBC's chain of 43 regional radio stations. The sites are branded as Where I Live and aim to cater for an audience from within the local area as well as expatriates from the region who want news and information from home.

The audience for BBC local radios tends to be predominately 50 plus, except for sports coverage and specialist music shows. One of the driving forces behind the establishment of the Where I Live sites was to reach a younger audience within the regions, people who would not necessarily listen to the local radio output.

To this end the site's content has a youthful feel with more feature based material and extensive coverage of music, cinema, theatre and the arts. As mentioned before, interest in sport cuts across all age ranges and we have comprehensive coverage of the areas' professional teams, including live web casts of matches.

The management within the region have taken a very proactive approach to running the website. They see BBCi Humber as a distinct strand of the BBC's output and not, as is the case with some other media operations, as merely a dumping ground for repurposed content from radio and television. Vital to the success is generating unique content for the site, with the bulk of the material on BBCi Humber and BBCi Hull Life produced by a team of 10 interactive journalists.

One of the key strategies underpinning the website is the concept of user generated content, giving BBCi users a real voice on the web. Although all websites rely on features such as talk boards, polls and e-mail feedback, BBCi Humber have taken this a significant step further by allowing the public to produce their own content for the site. This means moving over to publisher model of working rather than the traditional producer/broadcaster role.

One example of this practice in action is the Video Humber project. Members of the public are trained in the use of digital camcorders and laptop editing systems. They produce a weekly two minute video diary about their everyday lives.

Contributors vary from a farmer to a teenage boy living on a public housing estate. The diaries are proving extremely popular with the audience and are carried on the KIT service as well as on the website.

One of the benefits of working in a multi media environment is that material can be tailored to suit the most appropriate platform, using existing assets. It also makes production cost-effective, allowing material to be reversioned for different audiences needs.

When covering a story or event, much thought is given in editorial meetings as to what will work best on a particular medium, and how we can cross promote content.

The strengths of the web, images and graphics, space for more in depth analysis, access to archive information and interactivity allows us to support and complement TV and radio output and provide more rounded and in depth coverage for the audience.

For example take last year's local council elections in the city of Hull.The ruling Labour Party was voted out after nearly 30 years in power and replaced by a coalition of Liberal Democrats and independent politicians.

Prior to the election there were profiles of the key issues facing the voters produced by radio and television. BBCi Humber adapted these profiles and went further with historical backgrounds of previous elections, biographies and policies of the politicians standing for election and lists of polling stations.

Local radio covered the elections live during the night and we streamed an audio and video feed live from the count at City Hall on the website.

As they were announced, the results and other statistics were put up on the website, with the on air radio presenters steering the listeners to the pages for more information.

After the election, video journalists recorded interviews with the new council leader and the defeated leader of the Labour Party. These full interviews were put onto the KIT service. Broadcast television recut the interviews for their round up of the election results the next day's news bulletins.

The BBC regions are pioneering the use of video journalists or Personal Digital Production PDP as it's known in BBC speak. Journalists are trained in the use of lightweight DV cameras and then go out and shoot and edit material using computer based desktop edit systems.

This has led to a lot of the material we produce being ‘quad platform'. A shorter version of the material is packaged for the regional broadcast television news. A longer version is used on the KIT platform. Stills and copy are produced for the web page and audio is used by our radio colleagues.

There are obvious training and resource issues in this new way of working. Staff must be trained not only in using the technology but must also be equipped with the journalistic skills needed to produce material that works well on television, radio and the web.

Locally the commitment has been met with training provided for nearly all journalists in PDP techniques.

Later this year the BBC will open a brand new state of the art broadcast centre in the city of Hull. The key to this complex is a totally integrated production system that will allow journalists to source, edit and produce material for any medium straight from their desktop. All incoming material goes into a huge centralised computer system, so video, audio, graphics, stills and copy are available to all.

The building will also house an open centre where any member of the public can use computers to access the web. Continuing the user generated content policy, there will also be facilities for people to produce their own multimedia material.

In taking the public service broadcasting ethos and marrying it with new technology in both production and distribution, the programming and work methods currently being pioneered in Hull form an important model for the BBC that can potentially be rolled out across the UK.