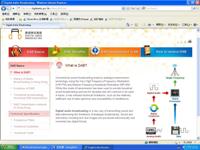 The Government of Hong Kong S.A.R. granted DAB
(Digital Audio Broadcasting) licences to three commercial radio broadcasters (DBCHK, Phoenix U and Metro) in late March 2011 and they were allocated 7, 3, 3 channels respectively, for a total of 13 DAB+ channels, each being 64 kbps in capacity. RTHK, the PSB (Public Service Broadcaster) of Hong Kong, has the remaining 5 channels. The four broadcasters formed a DAB Consortium and appointed RTHK to chair a Technical Committee to oversee the technical development, including network planning. A consultant was subsequently engaged to assist in network optimization.

The four broadcasters share common DAB+ facilities at the headend located at RTHK and at the hilltop transmitting sites. As of end August 2012, the audience can receive a total of 13 DAB+ channels (7 from DBCHK, 5 from RTHK and 1 from Phoenix U), broadcast from the primary network of 7 hilltop sites. The three commercial DAB licensees are required to launch their DAB+ program services within 18 months after obtaining their licences. Some major aspects of the technical development are described hereunder.

Network Planning
Seven existing FM hilltop sites were chosen for establishing the primary DAB+ network, due to established infrastructural support and their strategic transmitting locations. In Hong Kong, suitable hilltop transmitting space is extremely limited. The seven sites belong to the Government hence RTHK is the site manager. The network planning consultant has been provided with site data and other relevant network planning parameters and constraints, for computing the optimum ERP (Effective Radiated Power) levels, antenna gains and azimuths. Due to stringent cross-border signal-spillover limitations, log-periodic antennas have been deployed at most of the sites. ERP levels have been curtailed in order to limit cross-border interference. In addition, due to the terrain of Hong Kong, some transmitting sites radiate two or more antenna beams.

In comparison with other cities providing DAB/DAB+ services eg U.K. and Australia, the ERP levels are much lower, since high-power transmitters radiating in excess of say 10kW ERP cannot be deployed in Hong Kong.

Network planning has taken into consideration the five classes of reception ie. A (open areas), B1 (shallow indoors), B2 (deep indoors), C (inside a vehicle with external vehicle-antenna) and D (inside a vehicle without vehicle-antenna) according to BMCO Forum’s guidelines. In addition, two levels of reception quality ie. 95% and 70% of locations are defined. C/N values of 12 dB (for Classes A and B) and 13 dB (for Classes C and D), as well as a receiver noise figure of 7 dB, are used for computation. Penetration losses for Classes B1 and B2 are assumed to be 9 dB and 15 dB respectively. Receiving antenna gains are taken to be -16 dBi for built-in receiver antennas (Classes A, B, D) and -3 dBi for Class C. The minimum equivalent median field strength for Class B, the dominant mode of reception in Hong Kong, is estimated to be 62 dB µV/m (95% of locations), or 52 dB µV/m (70% of locations).

Due to the complex terrain and dense building clusters in Hong Kong, the primary network of 7 hilltop sites cannot adequately cover the whole of Hong Kong. Additional gap-fillers are necessary. The first phase of gap-filler implementation being planned involves 4 gap-fillers.

After establishing the 7 primary sites and 4 gap-fillers, the estimated cover rates in % for the five classes A, B1, B2, C and D (for “acceptable” reception, ie 70% of locations) are approximately 80, 79, 60, 94 and 62 respectively. The values are significantly lower for “good” reception, ie. 95% of locations: 70, 55, 32, 89 and 42 respectively. These estimates are subject to final network performance verification and confirmation.

Indoor Reception
For indoor reception, the dominant mode of reception in Hong Kong, the estimated cover rates are purely theoretical, ie. derived by applying penetration losses (in dB). In actual practice, indoor reception in small living areas as commonly encountered in Hong Kong (a room size of 5-8 sq. m being quite common) is heavily subjected to the effects of indoor standing wave patterns. It is very common to experience an indoor signal variation of +/- 10 dB ie. a total of 20 dB over a short distance of less than 1 m. Thus, good indoor reception depends very much on the exact receiver location and the telescopic antenna length/ inclination. In addition, due to the numerous dense clusters of high-rise buildings in Hong Kong, moderately increasing the ERP of a DAB+ transmitter alone is not expected to significantly improve indoor reception in its target service areas; establishing gap-fillers together with proper receiver/antenna adjustments are essential.

The theory of indoor standing waves is complex but RTHK has created an easy-to-understand animated-video (in both English and Chinese versions) to assist the audience to optimize their reception in marginal indoor reception situations. (http://www.digitalradio.gov.hk/en/how/advice.html)

Receivers and Prices
Since August 2011, the range of DAB+ receivers available in the local market has been increasing significantly. Today, DAB+ receivers may be purchased in retail shops and some convenience stores. The typical receiver costs about US$50 but unit price ranges from below US$30 to over US$400. The most common type is the “kitchen radio” type but in Hong Kong radios are not commonly used in the kitchens. Some receivers are capable of displaying Chinese characters. EPG has not been introduced yet and most receivers do not have a large display screen although most of them have a narrow display, for text.

Receivers in Hong Kong are not type-verified for technical performances. Receiver sensitivities differ significantly across different makes and models, the estimated discrepancy being 6 dB or more. This has probably contributed significantly to some reception difficulties in marginal reception areas. The estimated but unconfirmed number of DAB+ receivers in Hong Kong is about 80,000.

Mobile Vehicular Reception
DAB+ car radios are not common in Hong Kong, as the currently operating primary network does not provide comprehensive geographical coverage and has not yet catered for DAB+ reception in road tunnels. The north-western areas of Hong Kong and some other pocket areas require further DAB network enhancement. Progress has been made to establish DAB+ repeaters in the 11 Government-owned road tunnels. However there are 5 commercially owned road tunnels and they are yet to be addressed.

Another complication for mobile vehicular reception is that DAB+ car radios with an LCD/ LED display screen that the driver can view non-driving-related (eg. entertainment) information may not be used in Hong Kong unless the display screen is activated only when the park-brake is active.

As a result of the abovementioned factors, mobile vehicular reception of DAB+ in Hong Kong remains to be developed.

RPMO Analysis
Growth data is still lacking but based on an estimated penetration of 80,000 DAB+ receivers, the penetration rate (in terms of Hong Kong households) is about 3.4%, corresponding to an RPMO value of approximately 3.5 which is mid-way between Fair and Good.

The major factors limiting the growth of DAB+ in Hong Kong are:
- Lack of content (ie. O1, content), in comparison with the large number of digital radio channels available in other economies eg. U.K. and Australia.
- Consumer listening (ie. O2, consumer habits), with an estimated 12 - 14 hours per week of radio listening, this being a fraction of that of U.K. or Australia.
- Device Attributes (ie. O3), the differing sensitivities among available DAB+ receivers needing further attention.
- Overall reception (ie. O4, quality), hampered by terrain, dense high-rise building clusters, limited transmitting ERP and the lack of gap-fillers at present.

Summary
The primary network of 7 sites has been operating since mid-June 2012. Four of the five RTHK DAB+ channels carry existing AM program services; DAB+ has greatly improved the reception of these program services in the metro areas since AM reception has been subjected to severe radio frequency interference (RFI) due to man-made electrical noises. Based on a preliminary RPMO analysis, there remain several challenges to be tackled in future.
下载