The Impact of POP’s Election Polls in Hong Kong 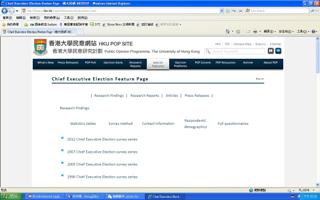 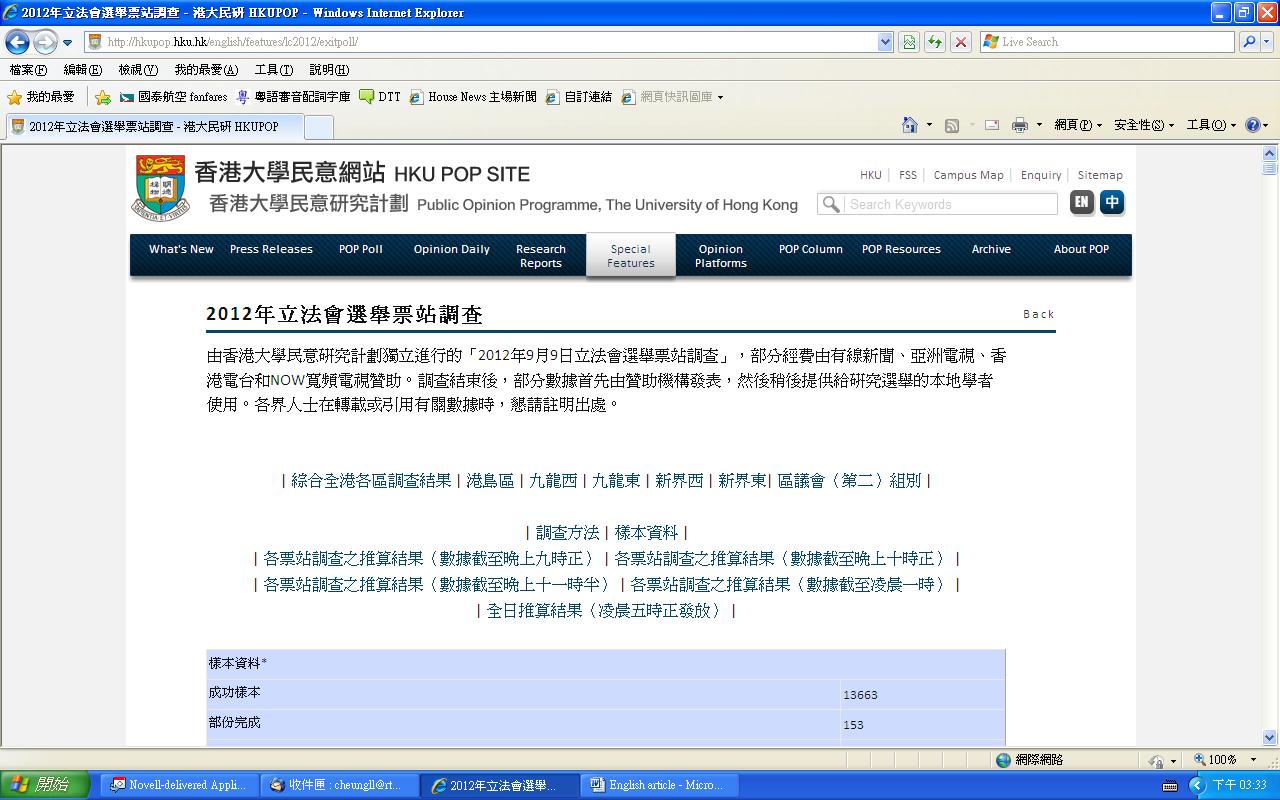 Hong Kong is a very unique society located in between the East and the West. We have the best of the two worlds, such as freedom of information, freedom of speech, rule of law, as well as asset for the future development of the region, yet we lack universal suffrage and international standards like those for opinion polling.

2012 was an election year for Hong Kong. There were two major elections, namely, the Chief Executive (CE) election and the Legislative Council (LC) election. As an independent research organization, the Public Opinion Programme (POP) at the University of Hong Kong conducted a series of instant polls, tracking polls, and rolling polls for both the CE and the LC elections, while exit polls were also conducted on the LC election day. Most of the polls were sponsored by local media, both print and electronic, and many of them were reported as major headline stories.

POP’s CE election polls
The CE election of 2012 was an election by a 1,200-member Election Committee held on 25 March 2012. Although it was widely expected that a pro－establishment candidate would win in a landslide, a number of controversies erupted involving the two pro-establishment candidates Henry Tang and Leung Chun-ying even before the opening of nominations. The campaigns were marked by scandals, dirty tactics and smears. Both Tang and Leung were attacked for their integrity and credibility. As a result their popularities experienced great fluctuations and finally plummeted by end of the election. For example, Leung’s support rate dropped from over 50% to around 30% while Tang’s even dropped to less than 20%. Since the CE election was not by universal suffrage, over 90% of the Hong Kong population was just bystanders with no say. All they could do was to pay attention to opinion polls, especially those conducted by independent academic polling institutes.

As part of its self-defined duty to the community as an independent research organization, POP conducted a variety of opinion polls before and after the CE election. All of them were funded by the media (both print and electronic) and other sponsors. The sampling framework was general citizens of age 18 or above, regardless of being registered voters or not.
As a general principle of POP, all survey results would be placed in the public domain eventually, but project sponsors had the priority to report the findings first. Since the support rate of the CE candidates was such a hot topic during the election, many local media funded the POP polls, including tracking, rolling and ad hoc polls.

POP altogether conducted more than 50 polls regarding the CE election in 2012, with about 30 public releases. Among the more than 250 news reports from both print and electronic media, about 40 of them were reported as featured stories with coverage of survey results, methods and commentaries. Besides, there were over 30 headline stories by newspaper sponsors Ming Pao and Apple Daily on POP’s tracking polls. This reveals that the media tended to magnify the impact of opinion polls. This was particularly so before the nomination period of CE election, when there were many “potential CE candidates”. After that, the election campaign was overwhelmed by negative news such as the scandals and misconducts of candidates CY Leung and Henry Tang, especially around television debates slightly before the election day of 25 March 2012.

Apart from the purely factual reports, many media also included commentaries on the survey findings, and a few negative comments of POP. However, as an independent polling institute, POP seldom responded to these attacks. At times, some of these “unfriendly” media would selectively use POP’s findings when they became favorable to them. Generally speaking, the news reports on POP polls were mostly factual and the results properly cited.

POP’s LC election polls
The 2012 LC Election was held on 9 September 2012 for the Fifth LC since the handover of Hong Kong in 1997. The election brought some changes: there were 70 seats in LC, ten more than before. While the electoral methods in the 30 “traditional” Functional Constituency (FC) seats remained unchanged, the five new seats formed a new functional constituency called the “District Council (Second)”, whereby the candidates were nominated by popularly elected District Councillors, and elected by voters who did not belong to any other FCs. This created the largest constituency with more than 3.2 million eligible electors. With all these latest changes and record-high number of candidates, this year’s LC election became unpredictable and much attention was put on scientific opinion polls before the election.

POP conducted about 40 polls regarding the LC election in 2012. There were total 7 releases of survey results by POP. Among the over 230 news reports from both print and electronic media, 33 of them were featured headline stories. As the election was fast approaching in August, two electronic media Cable TV and Now TV funded POP for its rolling surveys. Interestingly, both media used different angles to report the figures: Cable TV cited the popularity of the candidates based on the full base, i.e. figures including “undecided” and “don’t know”; Now TV chose to drop these invalid votes and report the actual vote shares of smaller samples. As a result, the discrepancy confused the public and the local media for a while, but very few doubted the credibility of POP polls.

Undoubtedly, what really caught people’s attention was the use of opinion polls for election engineering by a particular political camp. Even before the election day, there were arguments that POP polls, as single source of the LC candidates’ support, would encourage strategic voting. Moreover, POP made to the spotlight when it announced that it would continue to conduct exit polls on the election day. It became controversial because POP previously had hesitation to do so in view of the improper use of exit poll result for election engineering by some political parties, but it decided to proceed anyway.

Hong Kong still has a long way to go in achieving democracy, despite Hong Kong people’s effort for many decades. Before that day comes, opinion polls on election and social issues will continue to play a vital role for Hong Kong people and POP will continue to provide society with scientific data and professional expertise. POP will uphold its integrity and quality in conducting mainstream election polls, explore innovative and more-engaging polling methods, upgrade local polling standards and ensure the proper use of poll results by the media. There are bound to be obstacles, but POP will see them as necessary challenges, and overcome them with pride and diligence. The story of POP is not just a story of a research programme, it is the story of a society in the making.


* This is a summary of the paper presented by the authors at the 66th Annual Conference of the World Association for Public Opinion Research (WAPOR) held in Boston in mid-May 2013. This paper describes POP’s polls related to the two major elections in 2012 and how they were reported by the press.
下载