Where one in three people in the developing world lacks access to electricity; where 80% of the world population of five billion do not even have a telephone, where more than a quarter still do not enjoy life's most basic needs -- water, education, nourishment and shelter -- the rubbery figures on how the Internet has revolutionised human interaction and the world economy are rather meaningless.

The Internet has effectively created a borderless marketplace of labour, capital and information exchange, where the meaning of national sovereignty is continually challenged, and cultural identity reinvented. Theoretically, to operate in the "new" economy, countries must adhere to the rudiments of laissez-faire, have a well-educated multi-tasking population, a sophisticated financial structure, an entrepreneurial workforce and an efficient communication infrastructure. But in reality, different countries being differently structured and endowed by nature can only be better or worse prepared to respond to information and communication technologies (ICTs).

The fact is that despite the phenomenal growth of the Internet in the industrialized world and its increasing penetration into developing countries, many poor nations remain "technologically disconnected" from the benefits of the electronic marvels. The ILO's "World Employment Report 2001: Life at Work in the Information Economy" notes that the different speed of ICT diffusion in wealthy and poor countries has created a global "digital divide", where the employment aspirations and productivity potential of millions of workers in the developing world cannot be realized purely because they lack the appropriate education, skills, cultural outlook, and infrastructural support to respond to radical movements in the globalised economy.

This was to an extent foreshadowed in February 1994 when NGO delegates attending the International Symposium on New Technologies and the Democratization of Audiovisual Communication in New Delhi declared that a "global democratization of information exchange" should be more attuned to socio-cultural development imperatives than a "global information supermarket" dictated by laissez-faire forces.

The New Delhi Declaration stated that "all men have the right to be informed and to inform other people ... information is no commercial product but a media that we shall all share together."

It underscored a deep-seated Third World antagonism towards Western media monopoly in the information trade, which the delegates flagged had subverted and reduced the grassroots', particularly women and indigenous cultures' participation in the democratic process. The hard reality is that ICTs are being determined more by commercial forces than socio-cultural development imperatives. Those ill-prepared to respond to change are consequently diminished, disempowered.

Internet's commercialist ideology dominated by a few media multinational groups operated by a privileged class, not surprisingly, is regarded by some governments in the developing world as another evidence of 'neo-colonialism'. Ironically, it was only ten years or so ago when the developing world embraced the Internet as a vaunted panacea for under-development based on the premise that open access to information worldwide will catalyse social change, political freedom and human development. It's still a popular theory.

It's tempting to conclude that the developing world would have little choice but to respond to ICTs by focusing its critical national resources on creating a vaguely defined "information society", in order to partake in the fruits of "globalisation". An example is the costly IT infrastructures, such as Malaysia's Multimedia Super Corridor initiatives, launched over the last few years, but with few tangible results to show in the social and human development aspects. The Malaysian Prime Minister, Dr Mahathir's recently lamented on Malaysians' poor IT literacy when he launched an ICT literacy campaign in Kuala Lumpur.

The main beneficiaries of the Malaysian ICT initiatives, given the urban-rural and racial divide in Malaysia are yet to be seen in the context of equitable socio-cultural development, which politically is tipped in favour of what is seen as the historically disadvantaged majority Malay population. Only 11% of the Malaysian population currently owns a personal computer. Internet usage hovers around 5%. Out of 2.5 million personal computer owners in the country, 65% are in the urbanized states of Selangor, Penang and the Federal Territory where the majority population are Chinese.

Malaysian universities, regardless, have continued to graduate multi-tasking workers in computer science, multimedia and information technology. A Multimedia University was started in 1997 to set the process in train. Civil servants are placed on retraining schemes to prepare for a 'paperless' government. Selective 'smart' schools are earmarked to apply information technology throughout its curriculum and instruction methodology under a National Internet Literacy Campaign.

Malaysia's closest neighbour, Singapore has established equally ambitious goals. Primary school pupils in Singapore now undertake elementary computer training. At least one member in every household was 'programmed' to be computer-literate last year and the work force by 2006. The government has wired the island-state through a nationwide network, Singapore ONE. To ensure control over what information is accessed by a well-connected population, proxy servers function as border guards between Singaporean users and cyberspace. Here lies the paradox -- Asian government policies on technological openness don't often converge with government attitudes towards open public discourse, which is central to an IT culture. 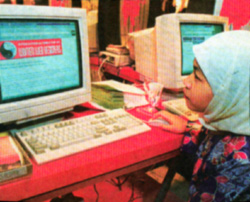 The cultural snag is that the bureaucracy, academic ethos and discursive environment in many Asian countries, are still heavily shrouded by an information secrecy syndrome, as far as research, information sharing and knowledge generation is concerned. Communication behavior and cognitive development from within the Asian family environment to the schools, community and governments have been built on a tradition of unquestioning deference to authority and group conformity. Self-censorship is embedded in for instance the Malaysian and Singaporean media process through the experience of history whereby bureaucrats limit the diversity of public discourse by bringing state power to bear on unsympathetic media, or surreptitiously, through interacting personally with selected media elites. The state dictum is "if you're not with me, you're against me" which to date has threatened journalists and their publics from stepping over the line.

Indeed, in countries where citizens have limited recourse to engage in open public talk, launching ICT applications is akin to installing water pipes when there is no water. In the wider Indochina region, the telecommunication infrastructure, thus consequential Internet penetration, seems light years away from the digital age. With ultimate connection to the Internet grid, the developing world as we know still has to turn to the West for the necessary equipment as well as expertise, thus completing the cycle of dependencies and control -- history reproducing its list of losers and winners in the digitalised global economy.

Indeed, ICT cannnot possibly be viewed on the economic globalised marketing level alone as its impact weaves through the cultural, psychological and sociological dimensions -- the nonmaterial dimensions of our being. A critical but overlooked influence on a nation's responsiveness to change probably is its social attitudes, religious beliefs, and culture. Thus the question: are some generational and cultural values naturally hindrant to change, to new developments? Are some societies naturally disinclined towards technology, suspicious of trade and enterprise, and ideologically opposed to Western, capitalist mores and power structures?

In our post modern communication era, ICT is not purely a technological phenomenon, as popular media reports make it out to be, but ultimately its pervasive impact is social and cultural and, given that radical cultural change comes slowly, the likely victims of ICTs for now will once again be the poorer nations.