The Craft of Dramatic Storytelling 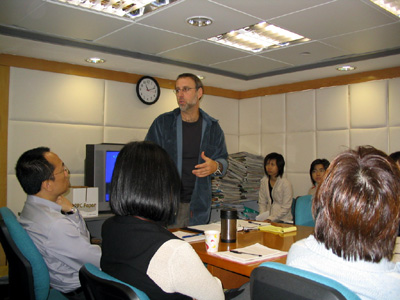 Kirk Wolfinger shared his production experience with RTHK colleagues.
In mid-November Rush DeNooyer and I spent an invigorating week lecturing and communicating with several colleagues at RTHK.We shared our ideas about producing documentary style programming for a contemporary television audience. Rush and I have long collaborated on many long-form projects for National Geographic, History Channel, Discovery, NOVA and several US Public Broadcasting specials.

I think it's important to set the stage here, just as we did in the class; in general, we do not produce the classic cinema verite documentary film. Nor do we produce pieces that have a formal journalistic angle. While we have done much work in both styles in the past, the traditional cinema verite is a long, costly and time-consuming process and not conducive to contemporary audiences or broadcast budgets. As for the more journalistic approach, it's not our experience or background. I should mention that two years ago we won an National Emmy for our NOVA production “Bioterror” which followed three New York Times reporters on the trail of biological weapons in the aftermath of September 11th. But that film was the exception to our work and not the rule and even that film did not begin as a strictly journalistic endeavor.


Film-making is a Craft

At Lone Wolf Documentary Group, we are called on frequently to tackle a subject that features a good historical story or follows a compelling character or a scientific journey, and very often we will follow a group on an expedition to an interesting location in search of...well, just about anything. From deep-sea shipwrecks with a mystery to lost religious artifacts in a cave in Israel to a group of men returning to Laos after 30 years to try and understand why they had fought a war, lost a war and many, many friends. In other words, we don't get to pick and choose our topics, we get assignments. Staying in business means we don't turn them down very often. The challenge then is, how do you approach a subject that may not be familiar to you or even frankly, hold all that much interest for you and do a great job making your television program? After 22 years, we've gained some insights about this challenge to share.

I believe that we are in the business of ‘storytelling’. Before we are journalists, documentarians or even filmmakers, we must first understand that everything we do starts with telling a great story. We are not in the ‘message’ business; if you want to send a message, use your email. We are not in the preaching business; let's leave that for religion. Having said that, if you do have a message , be it religious, educational or public service, what better way to make it effective than to wrap it in a great story ?

Storytelling is a craft just as film-making is a craft. There are tools that we use everyday in the making of a film or video; the more we use those tools, the more proficient we are at the craft. The same thing applies to storytelling. Anyone who believes their story or their character/subject is so terrific that they don't need to think about the discipline of storytelling every time they go to work, that all they need to do is show up and turn the camera on, is not taking the assignment seriously. If the situation is indeed a ‘great one’, think how much better your story will be if you do your homework! That is what we focus on every time we go to work and it's what we teach in the class; how to capitalize on every opportunity and how to make opportunities when few actually exist.

I could go on for several chapters and indeed, a week was barely enough time to scratch the surface of what I like to talk about. What follows is a thumbnail version of two of the more important lectures we covered: Dramatic Storytelling and The Interview.

We are storytellers; the more dramatic the story, the better the tale. Knowing how to find the dramatic elements of a situation and a character is a test of your talent. The bigger the choices you make about the scenes and the characters, the better you understand how and why a character's journey can be rendered dramatically to serve the story, the better filmmaker you will be. Your talent rests in your choices. The bigger the choices the more talent we see in your work.

Dramatic action happens in response to a stimulus either real or imagined. The more conflict and jeopardy you can reveal about the situation or the character, the more inherently interesting the piece will be. Show me a person attempting to achieve, uncover or accomplish just about anything, and I'll show you a character in conflict. You don't need much more than that to begin telling a dramatic story. As humans we all like to cheer people on, encourage the underdog or the person who is trying to accomplish something worthy. Within that person's struggle is a dramatic story waiting to be told. How you craft it, the choices that you make to bring it to light, reflect the size of your talent. That talent comes as a result of trial and error, reaching beyond your grasp and often failing in the attempt. It all builds toward knowing your craft, understanding the discipline required and doing your homework. After 80 films, I'm still pushing the limits of my abilities every time I go to work. I don't like to settle for what I did the last time and I rarely take the ‘easy' way to accomplish an assignment. I do my homework prior to filming every single time.

I could throw words and concepts around here loosely: conflict, obstacles, motivations, objectives, the through-line of a character and the world of a character; this is the vernacular that we teach and these words reflect the very tools of the dramatic craft.

We don't have time here to cover it all but suffice it to say, the craft of storytelling is the soul of what we do; the better you have command of the craft, the diligence with which you do your homework, the better storyteller you will be.


The Art of Interview

If storytelling is the soul of what we do, than the interview is the heart. We spend a great deal of time on the interview process in class since your film's success may well rest on the strength of your ability to conduct solid, dramatic, emotional interviews. First you must understand that interviews are not about gathering information; not great ones anyway. Interviews are about emotion. Who wants to listen to the World's most informed expert if they are boring? Certainly none of my client's as I've discovered.

Preparing for the interview is it's own process. Working through the questions, giving them the proper order for the best result is key. Refining questions to their simplest form so that you get the interview subject to the heart of the question (and therefore the response) that you are looking for.

Setting the stage for the interview is also important; using the environment to it's greatest potential. What does the environment for this interview‘say’or reflect about the person being interviewed? How does it help to further your story? The lighting, the choice of background, the choice of the lens, all makes a comment about this person in this space and time. Failing to make these choices is it's own comment, and not a good one by the way.

Perhaps this part of the story will be rendered best by having two people or three in the frame. When interviews become interactions between people, they stop being interviews and become scenes, and scenes are always much more fun to watch. People interact, they agree or disagree, they recall and reflect together and very possibly spark on a subject or an incident that would not have happened if they had been interviewed separately. Something to think about the next time you have two people who can tell you about a common event.

Again I can only touch on interview technique here; like storytelling, the better you become at it, the more your reputation will grow.

There are many other things we covered in the week-long course including researching and writing, working with the crew, casting for characters and even music. We hope that it was valuable for all who attended; it certainly is an education for me every time I teach.