Wikipedia and the rise of Participatory Journalism 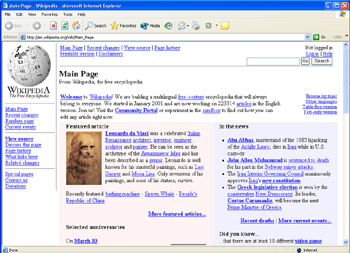 Wikipedia - The Free Encyclopedia.
Over the last decade, the Web has become such an essential tool for journalists and researchers, we can hardly imagine working without it. While information can be found quickly and easily using tools such as Google, the problem is often not a lack of content, but rather the large volumes of stale and questionable content. Determining the accuracy and sourcing of search results is a challenge for any Internet user, oftentimes negating the time saved by using it in the first place. However, the advent of participatory journalism has provided a unique solution to this problem – it engages the news audience to participate in the process of rationalizing Web content, crafting the news and contributing knowledge into the “media ecology”. Web logs and bulletin boards are examples of this, by calling on audience feedback and contributions to help put stories in context. This is especially true in the People's Republic of China, where it has become an important “reality check” to the state controlled media. However, also emerging on the world stage are wiki Web sites, where any user can immediately directly edit any page with one click of the mouse... It is wiki technology that has produced the largest form of participatory journalism to date – Wikipedia.

Wikipedia is an Internet-based, volunteer-contributed encyclopedia that in just three years has become a popular and highly valued reference. It has thousands of international contributors and is the largest example of an open content wiki. (The Hawaiian word for “quick”, WikiWiki, is the basis for the wiki name.) The goal of Wikipedia was to create an encyclopedia that could be shared and copied freely while encouraging people to change and improve the content. Each and every article has an “Edit this page” button, allowing anyone, even anonymous passersby, to add or delete any content on the page. What would surely seem to create chaos has actually produced surprisingly credible content which has been evaluated and revised by the thousands of visitors to the site over time...

The project was started by Jimmy Wales, head of Internet startup Bomis.com, after his original concept of a strictly controlled, PhD-edited free encyclopedia ran out of money and resources after two years, resulting in only a few hundred articles. Not wanting the content to stagnate, he put them on a wiki Web site in January 2001, and invited visitors to edit or add to the collection. It became a runaway success. In the first year it gained a loyal following, generating over 20,000 articles and spawning over a dozen language translations. After two years, it had 100,000 articles. Just this February, at the three year mark, it exceeded 200,000 articles in English and 500,000 articles in 50 languages. Every day, there are nearly 2,000 articles added across all the various languages.


Keeping it Social and Neutral

What could possibly allow this completely open editing system to work? Because they provide the ability to track the status of articles, review individual changes, and discuss issues, wikis function as social software, acting to foster communication and collaboration with other users. A wiki also tracks and stores every version ever edited, so no operation is ever permanently destructive. With regard to malicious contributors, in a wiki it takes much more effort to vandalize a page than to revert an article back to an acceptable version. While it may take five or ten seconds to deface one article, it can be quickly undone by others with just one click of a button... This crucial asymmetry tips the balance in favor of productive and cooperative members of the wiki community, allowing quality content to emerge.

However, technology is not enough on its own. Wales created an editorial policy of maintaining a neutral point of view (NPOV) as the guiding principle. “NPOV is an absolute non-negotiable requirement of everything that we do,” he says, and according to Wikipedia’s guidelines, “The neutral point of view attempts to present ideas and facts in such a fashion that both supporters and opponents can agree.”

Inspired by this policy, the grassroots project has confronted the same great issues facing modern newsrooms – sticking to the facts, attributing sources, maintaining balance and applying them uniformly, such as when to use the word “terrorist”, or evaluating what constitutes a cult or a religion.

So far, the effort has created numerous reference-quality articles as wide ranging as the Hutton Inquiry, algorithms, social history of the piano, origins of the American Civil War and severe acute respiratory syndrome. As its quality has improved, many news publications have cited Wikipedia on subjects such as Wahhabism, crony capitalism, folk metal, British “honours” system, Abdul Qadeer Khan and extinct animals. It has even been used in United States litigation, when in July 2003, a Wikipedia article on profanity was cited in a motion to dismiss a case in a Colorado court.

Wikipedia started out as an English language project, but it has actively supported the development of multilingual content and translations. German, Japanese and French versions of the Wikipedia have over 25,000 articles each and hundreds of regular contributors. The Chinese language Wikipedia (http://zh.wikipedia.org) is still relatively small, with just over 6,500 articles, and ranks as the 12th largest just behind Esperanto and Italian (as of March 1, 2004). The Chinese version is affectionately known in Chinese as 维基百科 or by the abbreviation ZH (short for Zhongwen), the two letter code designated for the project.

Given the number of Chinese speakers worldwide, it is intriguing the number of dedicated contributors is quite small, with only about a half-dozen regular writers for the site. However, they come from backgrounds showing the breadth of the worldwide Chinese diaspora – PRC residents from Beijing, Guangdong and Hunan; Taiwanese in Canada; Hong Kong residents; and Chinese speakers living in Singapore, United States, Canada, France and Germany. Because of this diversity of backgrounds, the content reflects this as well – it uses a mix of both simplified and traditional Chinese characters, mainly because the user community is so small there is not enough critical mass to create two separate versions. Nevertheless, simplified characters and colloquial putonghua tend to dominate the site.

ZH Wikipedia only began operation in 2002 when the first main page was created on October 27, 2002 by a Beijing-based user, Mountain. With the help of friends, he helped configure Wikipedia's software to support Unicode, which enabled the mixed use of both simplified and traditional Chinese... On November 17, the first official article, on computer science, was translated from an English article, and Chinese Wikipedia came to life. Since then, Chinese Wikipedia has added articles as direct translations of English articles, but it has also created original articles, which have themselves been translated into other languages.

A bright spot for “ZH” is its status as one of the fastest growing Wikipedias, and a large untapped set of contributors in the PRC who are increasingly becoming Internet-savvy... China remains second only to the United States in terms of Internet users, but that number can be deceiving. Unlike Western languages, inputting Chinese characters on computers is substantially more involved, posing a significant barrier to participating in online dialogue and article writing.

Since Wikipedia is hosted on a server outside the PRC, one particular concern is whether it subject to blocking by government Internet filtering and firewalls. So far, to the surprise of many, it has not been subject to any blanket restrictions, and mainland contributors don't foresee any impending threats. Whether it's the current small size and low profile of ZH Wikipedia, or a long term comfort with the existence of Wikipedia as an online source, the case of Wikipedia will be an interesting indicator of whether how the PRC sees this and other forms of participatory journalism affecting the mainland's media ecology.

Wikipedia has served not just as a readable reference work, but as a valuable teaching tool at the University of Hong Kong Journalism and Media Studies Centre, where it was used in undergraduate and graduate journalism classes to teach the skill of writing in a fair and balanced manner for an international audience. By collaborating online with others, students can interact with each other when writing, and receive advice and corrections from complete strangers around the world within minutes of making contributions. With students for which English is a second language, this provides a highly interactive experience for learning copy editing and grammar usage.

Wikis are just starting to receive recognition for generating credible collaborative content. Perhaps the toughest part of Wikipedia's future is how to manage its own success. While Wikipedia has recorded impressive accomplishments in three years, its articles have a mixed degree of quality because they are, by design, always in flux, and always editable. That reason alone makes people wary of its content. But first time visitors are typically impressed with what the community has developed, considering the decentralized nature of the effort and the usefulness of its content.

Wales envisions someday a “1.0” version of Wikipedia – a tangible product in printed form or CD-ROM, serving as a reference work for those not connected to the Internet. But this vision is still far from reality, as there is still contentious debate on how to do something that is unnatural for a wiki – freeze its content. Until then, thousands of contributors will keep plugging away, like a massive cyber-ant colony, working on the largest encyclopedia in the world.