The Other PSP - 4 Scenarios 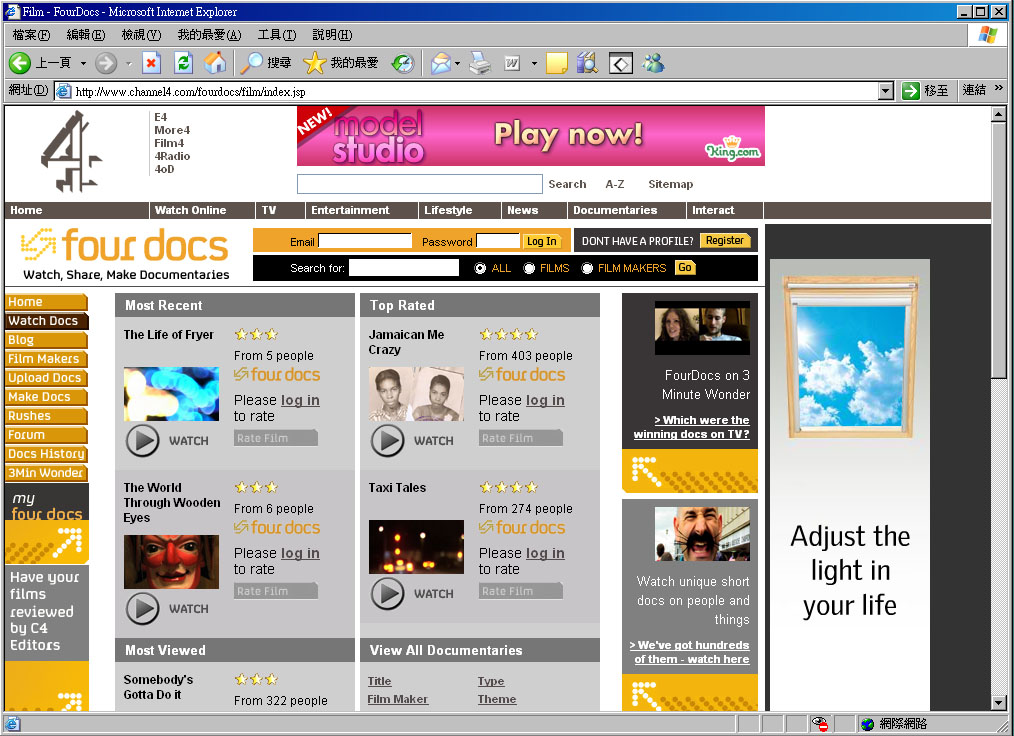 "four docs" is an example of a UK public service broadcaster engaging in social media.
There are several distinct scenarios for social media, and this is where public service publishing (PSP) comes in. Four scenarios spring to mind, depending on the territory and the various interests at stake there :

1. "Leave it to the market"
In this scenario, News Corporation, Google and the multinational media companies provide the framework for old and new media alike. Typically, an innovator comes up with a good idea for a new product, experiences runaway success and goes public or is bought out by one of the big media or IT companies, primarily social media that can make money on their own or offer synergies with existing media properties. Under such ownership, the commercially interesting bits of individual and collective expression are commoditised and subject to market interests. This is the scenario where Facebook and MySpace, YouTube, Second Life, Knol, Xiah, the World of Warcraft and similar Massive Multiplayer Online Games (MMOGs) all emerge and prosper.

2. "Altruistic individuals"
In this scenario, social media are created and nurtured by idealistic individuals such as Heather Lawver, the founder of The Daily Prophet (http://www.dprophet.com/), a web-based newspaper from the fictional school Hogwarts mentioned in the Harry Potter books by J.K. Rowlings. The volunteer writers, sub-editors and editors all work together out of a love for their shared passion, the mythical world of muggles and wizards. Another example from 2007 (not, however, the work of a single individual) is the knit and crochet community Ravelry. This builds on a long-standing, but informal community of people deeply interested in this group of handicrafts. The site is intrinsically motivating for its intended users. In its early phase, aspiring members had to join a waiting list so that the community could control its own growth and assure users of an adequate level of service. Unlike generalist portals like Facebook, the success of Ravelry is less subject to the vagaries of being "hot or not". It serves a self-defining community that has demonstrable needs and interests. Funding for social media founded by such altruistic individuals is typically in the form of donations and contributions from well-wishers, although sponsorship, advertising and subscription models could play a role once the product is on its feet. It very much depends on the extent to which commercial agendas interfere with the aims of the community behind the site or medium.

3. "From Public Service Broadcasting to Public Service Publishing"
This scenario applies in territories with public service broadcasters willing and able to adapt their activities to host such social media and disparate creative communities that would otherwise be unlikely to survive on their own. Here we find

‧Numerous local, regional and national projects within the UK coordinated by the BBC. One of the earliest of these, the Domesday Project, dates back to 1986 when more than 1 million adults and children worked on a multimedia record of their lives to commemorate the 900th anniversary of the Doomsday Book. The Web did not exist at the time, so the results were published on two hybrid videodiscs and CD-ROMs.

‧A nation-wide portal on lifestyle and well-being. Several hundred NGOs, public and private bodies are working with DR to create a national social media portal to help individuals and groups deal with lifestyle issues. This launches in 2008 and leverages the reach the www.dr.dk site has as the nation's most visited content site. What is interesting here is that this kind of activity promotes communication among a wide number of groups but also promotes reflection on what it takes to promote changes in lifestyle that lead to an improved quality of life. Incidentally this was recently identified as one of 31 key strategic research topics by the Danish Strategic Research Council.

‧Sports coverage on the Danish language version of Wikipedia. In 2006, the sports journalists at DR spend many of their production-free hours working with sports enthusiasts to create a comprehensive body of information about Danish sports in Danish. This was the first time that Wikipedia entered into a formal agreement of this kind to extend its coverage.

The Future PSP
The future of public service publishing is likely to be a mix of the four scenarios discussed above. Innovation will continue to throw up new products, some of which will continue in the hands of their public-spirited creators while others with market potential will be taken over. The challenge seems to be to assure the sustainability of initiatives that make a difference to society but that do not have commercial potential. For public service broadcasters at least, this seems to be the area where there is a good case for working with individuals and communities to further social media as a natural extension of "old" media - exploiting the synergies of using old and new together. Where public service broadcasters have a modest impact on media consumption in their territory, perhaps the fourth scenario would make sense. I could see this approach being adopted in, say, Singapore.

The three main policy areas that come to mind that would not be addressed to the same extent in the first two PSP scenarios are :

‧Sustaining citizenship and civil society
‧Promoting education and learning in their broadest sense and
‧Providing a forum for local, regional and national initiatives for the public good.

It will be interesting to review progress made in a few years?time to see whether "the other PSP" still has something substantive to offer media policy-making. Will the Sony device still be foremost in our minds, or will both PSP and "the other PSP" have come and gone, leaving Paralytic Shellfish Poisoning as the dominant connotation of the three-letter acronym?
下载