What types of business news do Hong Kong people consume? 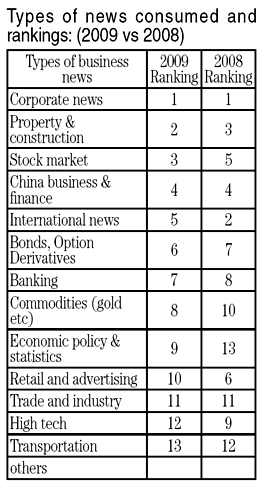 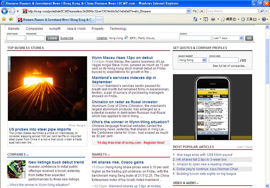 What kinds of business, economics and financial news do Hong Kong people consume?
A research done recently shows that corporate news ranks top on the list, followed by property and construction, stock market, China business and finance, and international news.

The survey was conducted between Sept 8 and 10, 2009, counting the number of items of news in 13 newspapers over a 3-day period.

As compared to a similar research done in early September 2008, the following salient points are noteworthy.

(a) Major findings:
1. News about companies remains the most popular.

2. Property market and construction news jumps to the second place from third.

3. Stock market-related news soars to third place from the fifth.

4. Retail and advertising news plunged from 6th place to 10th.

5. International business news fell from second to the fifth place.

(b) Analysis:
Business news is about companies, markets and people and there is little surprise that corporate news remains the most popular among Hong Kong people. As Hong Kong’s property market has experienced a so-called “mini boom” in the second and third quarters of 2009, there is no wonder that property market stories have risen to rank number 2 from number 3 a year earlier.

In the same vein, the positive outlook of the local economy has pushed the Hang Seng index to its highest level in a year in early September. Hence, it is logical that stock-market related news jumps to rank 3rd from the 5th place in 2008. As retail and advertising businesses slow, mirroring the poor business environment, so does related news. Therefore, it should surprise nobody that retail and advertising stories drop to the 10th place from the 6th in September 2008.

In early September 2009, Hong Kong newspapers were splashed with renminbi bond issues, gold and property prices shooting through the roof and numerous initial public offering stories. In the same month a year earlier, nevertheless, the picture was very different. Local newspapers invariably were filled with stories about Fannie Mae and Freddie Mac (housing mortgage corporations) being rescued by the US government, and investment banks including Lehman Brothers and Bear Sterns having trouble as the financial tsunami was about to strike hard at the world economy. Consequently, international business news was ranked 2nd in September 2008. It fell to the 5th place in September 2009.

(c) Weaknesses of the survey:
1. The research only counts news items over a 3-day period. It could have been longer, say, 7 days.

2. The research only counts the number of news items and not measures column-inch, which could have been more accurate.

3. The categorization of business news is arbitrary. There could have been a more authoritative classification. (It is acknowledged that this survey is not scientific enough. We hope researchers in future can improve upon these weaknesses.)

Business news new trends
Our survey, in fact, also counted the number of columns written by reporters, columnists and stock analysts. Because these are analytical items and not news, we didn’t include them in the rankings. Had we done so, the number of business columns would have been ranked 2nd, trailing only the most popular corporate news. Nevertheless, the finding shouldn’t shock anyone as we know Hong Kong people love to invest (or gamble) in the stock market and they’d love to read about “tips” and recommendations of investment targets. There is nothing wrong with this. We’d like to see, however, that whenever analysts recommend certain companies’ stocks, they should declare whether they have holdings in these companies and whether the firms they work for have business dealings (such as capital-raising agreements) with these companies, in the name of transparency.

Another development that we have observed is the flourishing of “gossipy columns” or “ba gua news” in Cantonese. Business news traditionally performed the functions of informing, educating and enlightening the public. But now business news also starts to “entertain” readers, very much like newspapers’ entertainment sections. We see nothing wrong with this development. In fact, business news shouldn’t always be boring. Business news not only covers companies and markets. It should also tell stories about people; and the writing styles can be creative. Of course, gossips are fine as long as facts are there.

Code of ethics
The Hong Kong Journalists Association has a code of ethics for all reporters and editors. But we hold the view that business journalists should also observe the following: they shouldn’t purchase stocks of companies that they are covering to avoid conflict of interest. It is very hard to be objective when one’s life savings are at stake. To avoid this predicament, newspaper companies should set rules to ban business journalists from buying stocks of companies in their beat.

The Wall Street Journal (the writer of this article worked there for 10 years in the 1980s) has (even today) very straight rules about employees’ investment. Reporters and editors simply can’t buy stocks, period. The only exception is stocks of Dow Jones & Co., which owns The Wall Street Journal.

Hong Kong newspaper companies don’t have to be as straight as The Wall Street Journal. But adopting some kind of ethical practice is good for the industry’s long-term development, raising the standard of business journalism and earning the trust of readers.

Latest development
There is a famous song by the Byrds entitled “Turn Turn Turn”. Here are some of its lyrics:

The recent development of business journalism in Hong Kong reflects exactly the spirit of this song. In recent months, three business magazines have folded. They are “Hong Kong Business”, “CFO (Chief Financial Officer” and “Power”. “Power” is more lifestyle-oriented than the first two business magazines but its coverage of business people was great.

As the Byrds’ song says: there is a time to die (the three magazines) and there is a time to be born (Richard Li’s new “baby”). We are not interested to know much about the personal life of Mr Li (PCCW’s major shareholder) or his new-born child. But his other “baby” (a huge business news project) has caught our attention because its scheduled birth in mid-October, 2009 is exciting news to people who care about business journalism in Hong Kong and the Greater China region.

Investment bankers, brokers and fund managers in New York or London everyday before the markets open read news and analysis about Asian countries (including China, Hong Kong and Taiwan) and companies mainly from Bloomberg, Reuters, Dow Jones, AP and AFP. Imagine there is a newswire that is more authoritative in its coverage and analysis of companies and economies in the Greater China region than all of the above news agencies. Wouldn’t readers be interested? That’s what we talk about here: Mr Richard Li’s new newswire is yet to be named.

Before this new newswire is launched, perhaps in a year or two, several platforms are being constructed. This is great news for aspiring business journalists who can write in English. We can count so far there are three platforms being built. One is called “Cai (Wealth)”, an English business news website headed by Stuart Jackson, formerly business editor of the South China Morning Post. Mr Jackson will hire at least 20 journalists to work for this new website. Another platform, headed by Chan King-cheung (chief editor of Hong Kong Economic Journal) and Chris Yeung (editorial director of HKEJ and formerly editor-at-large of the SCMP), will also be an English business news website. This new English website is different from HKEJ’s Chinese website (headed by Chan Pak-tim). The English business website will employ at least 20 journalists and some translators. Some contents will be translated from HKEJ. This website is independent of Mr Jackson’s.

The third platform (there could be more) is the contents of a very authoritative business magazine on the mainland called “Caijing”. Mr Li has struck a deal with Caijing to translate its contents (many are exclusive interviews with key officials and business people in China) into English. When time is ripe, Caijing (English contents), Mr Jackson’s website and HKEJ’s English website will merge into one and form a powerful news agency with a focus on the Greater China region.

In the field of business journalism, there is always hope.
下载