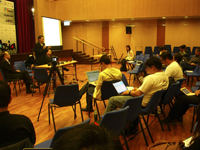 BlogFest.Asia is a festival for bloggers in Asia.
The Asian blogosphere spans over 150 Asian countries with different native languages and over 3,000 dialects. Some of these countries are highly developed in terms of communication infrastructure, others are still struggling to get the telephone into villages and homes.

This huge disparity has historically made it difficult for Asians to meet and share ideas.

With Mainland Chinese Internet user base on the rise, and wireless broadband becoming more and more accessible, high-speed Internet availability is no longer restricted to places like South Korea, Japan and Singapore, the common language on the Internet is no longer English; Asian languages such as various forms of Chinese, Japanese, Thai and Bahasa Melayu are becoming common in pockets of Asia.

At first, of course, there were the businessmen -- businesses were setup in Malaysia, for example, to help Malaysians purchase low price items on TaoBao.com; shops in Hong Kong were helping young people purchase items from Japan.

With that came a greater need for cross border communication, and cross cultural communication. Finally, Asians are slowly finding ways to communicate with each other through the Internet.

However, it is still relatively difficult for a Gaijin to understand Japanese blog entries, or blog entries in Thai, Tamil or Tagalog. Fortunately, Taiwanese blogger Portnoy Zheng led an effort which that was later adapted by Global Voices to translate interesting and important blog entries into English.

BlogFest.Asia
About a year ago, the idea of organising an event that would bring together bloggers from around Asia was mooted by Taiwanese blogger Qiao Ching, Chinese free speech Activist Isaac Mao and yours truly, a Malaysian blogger.

The event was envisioned to be a festival — a time to celebrate the act of putting words together and self-publishing them online. As expected, a blogger’s event was organised in the Web 2.0 manner; an email detailing ideas and topics for discussion was circulated among the movers and shakers of the social media world.

And when it was finally time to put things together, invites were sent to various parts of Asia, and the response was great -- bloggers from over 20 countries responded to the call. Bloggers were invited to speak, and issues were brought up by various parties, such as Global Voices and Mongolia-based green activists.

The Malaysia BloggerCon committee (MYbloggercon) decided to send a delegate of six to Hong Kong to participate in the event as HKbloggercon, CNbloggercon and Asia Blog Award were the three highlights of BlogFest.Asia, this is the first time Asian bloggers from different walks of life meet.

The Meetings
Being the first major blogger event of the region held in Hong Kong, bloggers from Davao, Philippines, Vietnam, Cambodia and Mongolia had the chance to meet and share.

One of the biggest issue was life after BlogFest.Asia. The participants have unanimously agreed that there is a need to carry on work to unite bloggers in the region. The sustainability of such an event depends on a solid plan to keep bloggers informed.

Though most of the bloggers at the forum did not share a native tongue, they shared the same passion to unite and share their experience using blogs as their communication platform.

“I personally would love to see such a community grow,” said Chiao Ching, “and I will support these efforts in whatever manner I can.”

Following the meeting, plans have been made to build a community of Asian bloggers in a formal structure in the months to come.

The Disputed Asian Blog Award
Being co-founder and organising committee chairman of MYbloggercon Awards, my personal interest at the event was to observe how JACSO, a celebrity blogger’s blogging service provider, organises the Asian Blog Awards, since nothing much were spoken about it, let alone promotional activities.

My question was HOW can an Asian blog award not involve other Asian bloggers? Some Hong Kong bloggers have even commented that the event does not even represent Hong Kong,let alone Asia. This question was also brought up by Hong Kong veteran blogger known as Sidekick in a Google Mailing List.

“They can say anything they want, but Miss Asia of ATV doesn¹t represent Asia either,” a staff told me when I asked her.

Nevertheless, the Asian Blog Award went on like clockwork, as blogger participants were (nicely) ushered out of the venue so the young, handsome and beautiful can take over the auditorium.

While I have no qualms whatsoever about having “star value” in the event, the starlets gracing the Award Show somehow dampened my feelings about the effort, and I was not alone, Kae Wong, the Deputy Chairperson of MYbloggercon shared my feelings.

The Asian Blog Award had a very short participation window of less than 2 weeks - from the announcements to the closing date for entries took only 10 days, JACSO¹s Director Alex Chu was not apologetic about the short time frame.

“We were not given much time to organise this,” was his official response to this query.

Since the organiser didn’t have enough time, most participants came from JACSO’s stable of celebrity bloggers.

“We don’t want to be part of the event,” Sidekick told me when I called her.

Though she was reluctant to tell me why, it was clear that a group of bloggers didn’t feel that they were represented at the event. The irony was that the story of such early bloggers in Hong Kong were told in a small exhibition at BlogFest.Asia.

When we first organised MYbloggercon Awards in Malaysia, we were faced with similar resistance from fellow bloggers, some questioned our motives and others simply felt that there is no need to participate in an event that does not give out cash prizes.

This situation was magnified in Hong Kong as highly individualistic bloggers were not compelled to leave the comfort zone 12 inches from their computer screens to meet people who are strangers in the very first place.

When MYbloggercon first organised it’s bloggers’ gatherings, it wasn’t an easy task to earn the trust from fellow bloggers, especially when you charge each blogger money to attend such gatherings.

Social Media network such as Facebook and Twitter became a crucial means for bloggers to mobilise, blogs have once again become each individual blogger¹s private space to share their thoughts away from the rustle and bustle of Facebook tagging and picture sharing.

Fortunately once bloggers met in real life, the momentum snowballed and it was a lot easier to organise events as the local blogosphere is made up of friends and acquaintances or familiar names.

So as the Curious like us watched the Activists discuss the goodness of social media, the Beautifuls took the stage like storm.
下载