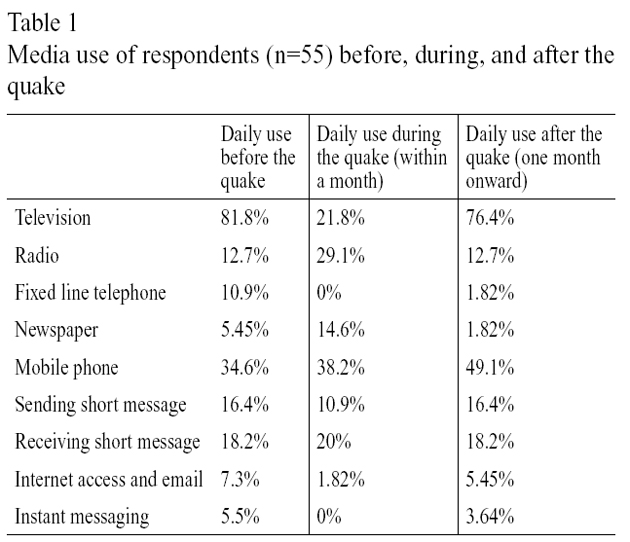 Effective crisis communication has been identified as one approach to facilitating the disabled community to better prepare for disasters, to allow for a timely response, and to aid in recovery efforts (Spence et al., 2007). In light of the fact that there is a higher mortality rate in natural disasters among people with disabilities compared with the non-disabled (Chou et al., 2004), the primary objective of this paper is to examine media use and risk communication requirements for people with disabilities during a major emergency situation, with a view to developing best practice recommendations aimed at improving their safety and wellbeing during such a crisis. This study is funded by The University of Hong Kong 512 Earthquake Roundtable Fund.

On 12 May 2008, an extremely severe earthquake, measuring 8.0 on the Richter scale, occurred in Sichuan province. According to a press release issued by the Sichuan provincial government on 7 May 2009, 68 712 people were killed and 17 921 were reported missing.

In the past, media coverage of major local disasters or crises, like the Tangshan earthquake in 1976 (Chan, 2009) or the SARS outbreak in 2003 (Abraham, 2007), was strictly controlled and limited in China. Contrary to these examples of media censorship, the first reaction of the China government to media coverage of the Wenchuan Earthquake was completely different. The Chinese authorities eased their controls on the media and were unusually open to media inquiries, in particular the reporting in the early stages of the catastrophe (Chan, 2009). Images of the most severely affected regions were broadcast live on the state-controlled national television channels. Such relatively unrestricted circumstances offer an unprecedented opportunity to examine how disaster related information was disseminated through the mass media to people located in the affected areas.

Research questions
1. To understand the characteristics of media use of people with disabilities before, during and after the earthquake

2. To analyse the disaster-related content people with disabilities received through the media, how they interpreted it, and their difficulties, if any, in receiving or interpreting information during and after the earthquake

Methodology
Semi-structured interviews with people with disabilities were conducted in Deyang city, Sichuan. The fieldwork was facilitated through the participation of the School of Social Development and Public Policy of Beijing Normal University. Participants were selected based on purposive sampling, whereby the researcher selects a sample based on experience or knowledge of the group to be sampled, taken from the disability registries maintained by five local county governments in Deyang city, and chosen to reflect different communication needs of the disabilities populations in China.

Each interview in total lasted for about 60 to 90 minutes. Two interviewers, who had previous experience in interviewing people speaking the local Sichuan dialect, were trained to administer the interviews. Fifty-five respondents were interviewed successfully during the period from the last week of August to early September 2009 and those audio recordings were transcribed for analysis. Almost 60% of the respondents were female and 40% were male. About 84% were aged between 31 and 50 years. Over 90% had attended primary or secondary school. The great majority lived in a rural area. Over 40% were unemployed before the earthquake and about 15% were never married. The commonest disability was some form of physical impairment.

Results
Table 1 shows the respondents’ changes in media use before, during, and after the quake. In the one month period immediately after the earthquake, fixed lined telephone and television usage dropped drastically because of service interruption directly due to the earthquake, whereas the respondents reported increasing usage of other wireless communication devices, like radios and mobile phones. The respondents’ reliance on newspaper information also increased drastically in the one-month post-earthquake period. The daily use of sending and receiving short message did not demonstrate marked changes before and after the earthquake.

The following are some core observations arising from the analysis of the interview transcripts.

2. The major technical resources for information reception during and shortly after the disaster were wireless devices: radios and mobile phones. The interviewers were told that most of the people with disabilities owned radio sets and/or mobile phones. Even those belonging to the lowest socio-economic strata could afford a RMB$200 handset (about US$29). Some were even affordable to subscribe value-added mobile data services, such as news and health information, which cost them an additional RMB$3–4 per month (about US$0.4–0.6).

3. Before the earthquake, a mobile telephony provider had offered the local disabilities support group very favourable terms, allowing them to have a ‘virtual network’ in which communications among group members was very cheap or effectively free of charge.

4. In the first few days after the earthquake, people with disabilities relied on battery-powered radios and face-to-face communication to receive disaster-related information. We were informed that many listened to the radio in groups, as some people’s radio sets were lost when their houses collapsed. Some even tried to search the rubble for their radios. While many of the respondents reported themselves as dependent on personal communications, many rumors circulated, for example about robberies and polluted drinking water.

5. After the earthquake, power for communications devices became a key issue as people in the affected areas struggled to maintain communications with the world outside. The price of a small battery was inflated to RMB$20 (about US$2.9) right after the disaster. Some people even walked 10 km from one village to the other in order to charge a mobile phone battery.

6. Besides informational support, the media role of providing emotional support is seen as very important. People reacted positively and emotionally to the news that Premier Wen Jiabao was to visit Sichuan, but negatively to the traditional disaster media coverage that focused on the death toll and on destruction.

Discussion
Wireless communications were the major channels of information reception for the people with disabilities in China during and shortly after the disaster. Emergency managers are recommended to take full advantages of these channels to deliver emergency information tailored for groups with special needs, for example weather reports, emergency alerts and instructions for evacuation. Resumption of mobile and radio communication services should be considered a top priority during recovery from an emergency.

One of the good examples of the application of wireless communication for the people with disabilities is the ‘virtual network’ service, as described above. This communication package apparently stimulated peer-support among peoples with disabilities before and after the earthquake. This seems to offer a showcase of how communications technology could facilitate and empower disadvantaged people to form self-support groups in China.

People with disabilities had a huge demand for disaster-related information. While issues like personal safety and disaster mitigation are inevitably a top priority at the time of a disaster, the information seeking needs of people in affected areas warrant disaster planners’ close attention, especially for those with limited mobility or with sensory impairments. Media professionals and emergency managers needed to be aware of the characteristics of media use of people with special needs, and to understand the contents of communications that could play important roles in providing informational and/or emotional support to people with disabilities.

(*This article is a shortened version of a paper in the International Journal of Emergency Management. Full reference to the paper should be made as follows: Fu, K., White, J., Chan, Y., Zhou, L., Zhang, Q. and Lu, Q. (2010) ‘Enabling the disabled: media use and communication needs of people with disabilities during and after the Sichuan earthquake in China’, Int. J. Emergency Management, Vol. 7, No. 1, pp.75–87. Inderscience Enterprises Limited retains the copyright of the paper.)