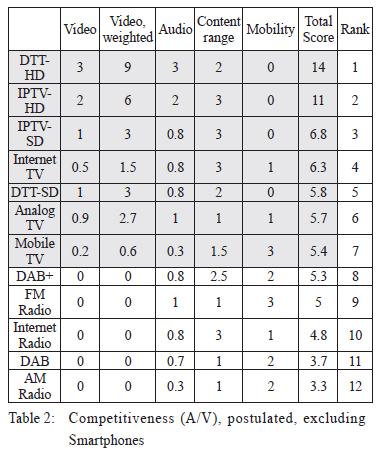 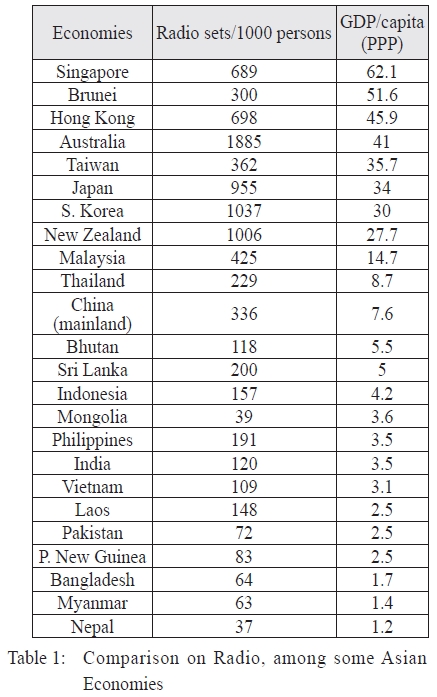 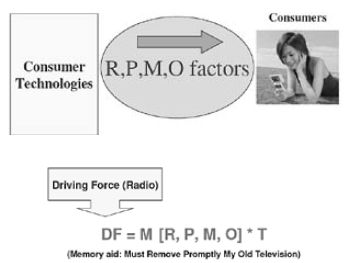 Radio has been a stable media over time, as it satisfies a basic human need, i.e. to be connected and engaged to the other end, through listening. It is a minimal-effort media. By allowing us to multi-task, Radio secures its place in the modern and busy world. This paper looks at Radio in Asia, based on the RPMO analytical model (J.Yip, Media Digest, 2006-2010). For any consumer technology, the first 2 pertinent questions are: (1) How much? i.e. Can I afford it? and (2) Is it worth it? , i.e. Should I buy it, on considering the opportunity cost?

A Snapshot of Asia
Table 1 shows the radio sets per 1000 persons, in some Asian economies, and their GDP-per-capita (PPP, Purchasing Power Parity) in US$k.

High receiver ownership occurs in economies with high GDP-per-capita. Worldwide, for 1,000 persons, there are about 1,267 radios for a high-income group, but only 138 for a low-income group. Radio receiver cost is hence a critical issue.

For a 90% home penetration (say, 3 persons per home), GDP-per-capita (PPP) has to be over $7.5k pa. A radio (AM/FM) costing say $15 is only 0.2% of the GDP-per-capita, this being the average “marginal value (or in economic terms, marginal utility)” of a radio set to the consumer. For a digital radio receiver of $50, only high-ranking economies are likely to pay for it.

Radio in the Competitive Multimedia Environment
Now, we come to the second consumer question on affordability. Table 2 has been postulated, to show its limited competitiveness (before the emergence of powerful smart-phones with wireless broadband internet access). The smart-phone boosts mobility to a value of 3, yielding a total score of 6.8 (for the radio part), helping the Radio group (ranging from DAB+ to AM Radio) break its rank. Radio listening on smart-phones is hence an important issue.

RPMO Model and Analysis
The equation and a conceptual diagram are given below, for analyzing the driving-force factors.

RADIO, RPMO factors and their components
Regulatory, R:
- Spectrum availability
- Government incentives for the industry to invest
- Definitive timeframe for analog radio off

Marketing, M:
- Strong and effective promotions by the industry
- Exploitation of older audience’ passion for  radio

We now compare the 3 major groups of radio-capable devices, using the RPMO model:

R (Regulatory):
Regulation of SP internet radio access is generally less stringent than that for FM or for DR.

P (Pricing):
FM is extremely price-competitive. DR is less so. SP (with mobile subscription) is most expensive among the 3 technologies. A related general equation on receiver pricing, is as follows: Price A = Price B * (ratio of GDP/capita) * (ratio of radio listening in hours/wk)

O1 : (Content):-
FM and DR capitalize on local content. Content on SP (and PC for that matter) is huge. Due to the large number of channels, it could cater for “Long Tail” consumer needs, across countries.

O2: (Consumer Habits):-
Listening hours per week vary greatly among Asian countries, ranging from 13 h/wk in China to 24 h/wk in Malaysia (although Malaysia’s receiver ownership is moderate). Consumer habits are hard to change. Most listen regularly to only several channels and want to carry around just one mobile device. SP has widen access to radio services; internet listening is rapidly increasing.

O3: (Device Attributes):-
On ease of use, FM is the best and SP is the worst, hence older people (who are loyal to Radio) find FM more user-friendly. Features on FM are most limited and those on SP are the richest; DR is somewhere in-between.

The RPMO values for FM, DR and SP for each economy can be computed by using the following RPMO calculator, downloadable from RTHK, under HDTV and IPTV Development (Media Digest, 2009/04)1.

The various pparameters vary from one economy to another, so specific RPMO values for FM, DR and SP cannot be easily calculated for Asia as a whole. The most sensitive parameter appears to be P (Pricing). DR and SP growths (penetrations) in an economy are substantially constrained by its GDP-per-capita. For high-income economies, rapid growth of SP sales in Asia (84M in 2010, 137M units in 2011, IDC), easily eclipses those of DR, as SP offers additional high-value multi-media/ communications features.

Fostering Radio Growth
Based on the RPMO model, the following measures are required:

- Liberal regulatory framework, providing incentives for the industry to invest.

Summary
Inherent factors affect Radio growth e.g. GDP-per-capita, consumer habits, limited interactivity on FM and on digital radio. Growth of radio in Asia may be enhanced by building on the strengths of Radio (minimum physical effort, multi-tasking), ability to take the listeners onto a mental tour (inform, educate, entertain, much the same as being a good tourist guide), focusing on local content, etc.

Digital Radio is a bridging technology, in terms of techno-economics. Intensive efforts in receiver price reduction, marketing/ promoting, content development and, for a city like Hong Kong, transmission improvement (but deep-indoor reception could be solved by using a smartphone on home WiFi). Despite this, digital radio has a huge advantage in being not subject to the increasing internet congestion problem eg in wireless data transmission.