Radio, Where Art Thou? 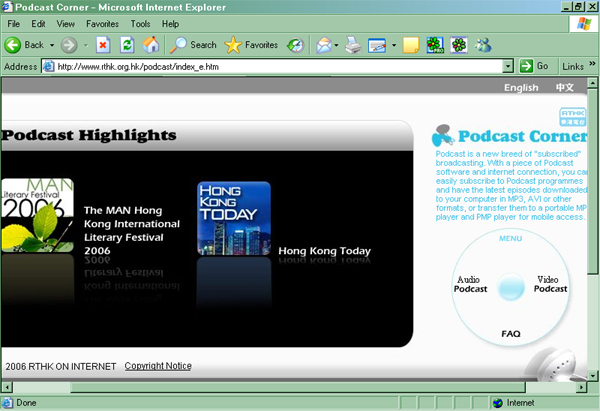 RTHK ON INTERNET offers a Podcast Corner for mobile access.
The conventional wisdom is that radio is dying a slow death. Young people are gone and the best we can do is “manage decline gracefully”.
Perhaps even the kinder, gentler crowd would say radio will never die but it is simply not up to the challenges of the digital age. Both are wrong.
Got your attention? Read on!
The RadioAsia 2006 conference was held in Singapore from 20-23 June 2006. The set of meetings ran parallel with two other conferences: BroadcastAsia and CommunicAsia, also held at Singapore Expo. It was an excellent opportunity for me to observe trends in radio as well as meet and network with others in the radio and television industries.
I took part in the proceedings as a speaker. My presentation was entitled, “Cross-Media Interactive Partnerships in the Digital Age? Later I was asked by the ABU (one of the organizers) to join an experts?panel in a separate session. It was a good chance to learn as well as inform delegates of the progress that RTHK has made in recent years in providing new services such as RSS and podcasting to listeners and viewers.
But back to the main theme: How do we keep radio relevant in the fast-changing media environment?
As the media futurist Gerd Leonhard put it, “The future is wide open? with dazzling new opportunities that far outweigh the perils. Radio already has the trust of its listeners, which is crucial in today’s networked economy. It has content that is undeniably still in demand. Content is not the problem, functionality is. “Going digital” and swiftly embracing new technologies, and taking advantage of the emerging conversion opportunities with video, TV, print, wireless, and games is the only the beginning. Radio is progressing toward a fully converged and multi-platform future.
Yet, at radio conferences all over the world managers are busy contemplating their navels. Let’s take a closer look (at the issues, not the navels).
A quote by George Orwell sums up the challenge: “To see what’s in front of one’s nose requires a constant struggle? Developments are happening so quickly, they are difficult to see. Radio’s present market positioning is challenged in many ways; for instance, people under 20 get their music elsewhere, and do not listen to radio for news and current affairs. In the UK where digital radio is prevalent, the average age of a digital radio owner is 51. So, young people are gone: where did they go and do we ever get them back?

Audio and video are converging, particularly on hand held devices. Although radio is normally thought of as distinctly different from television, radio is beginning to embrace images through website use and even handheld devices. “Visual Radio” is now available in various markets such as Singapore and Britain. Hewlett Packard and Nokia provide a platform for radio to be received on mobile phones along with music videos, contests, artist information, advertising and other visuals to match the audio content. The audio is received via a regular analog FM radio embedded in the phone. A presentation of graphics and text, sychronized to the audio programming, is streamed to the phone over a data connection. Visual radio applications are also possible over DAB Digital Radio. More and more, people want full and unobtrusive mobility for radio; that means making programmes available on devices with full functionality. Internet in cars is only two years away, which will likely hurt traditional radio.
Nokia now sells more cameras than any other company. More radios too.
Digitization and total dissemination of all media content is coming. Before long all the music ever recorded will be available on a device the size of a wristwatch. At this point, the concept of an “attention economy” will supersede the notion of a “distribution economy” In other words, once the customer has access to all content; getting his or her attention will matter most. Selection will be more important than availability. But what then of massive media overload?

For radio, we will need more “time shifting” and “freezing”. These are phrases used to describe giving listeners the opportunity first to find, and then to listen and download radio content when they want it. Radio is behind other media in offering this functionality. People seem to agree that radio “on schedule” is going out. If you treat listeners as receivers they are going to turn you OFF.
Another trend developing is to democratize content creation. The buzzword for this is User Generated Content. Mass media are colliding with personal media. More and more, people are generating their own content (blogging, ringtones, MySpace, YouTube etc.) and content providers are looking for ways to take advantage of this. Radio does this in a small way through phone-ins, emails and text messaging, but we need to look for more. Podcasts are a good example. As of last month there were 30,000 radio stations worldwide; there are already 47,500 podcasting stations, and podcasting has only been around for 1-2 years. Sure, now we podcast a significant amount of material, but could we also benefit from users?or listeners?podcasts? Perhaps, but how would you separate the wheat from the chaff? One way would be peer review ala YouTube. Perhaps the features could be posted on the radio station’s website. Then let the long arm of the listener do much of the screening before the producer or editor steps in. An observation: people love to share things: texts, photographs, audio bites, video snippets and music. That’s one reason why the Internet has become so pervasive.

Music is not about hits

Here’s how the keynote speaker, Gerd Leonhard puts it, “Other megatrends that are impacting radio are the strong trend towards content-eclecticism and the rise of niche-markets and various ‘long-tail’ offerings, the trend towards decentralized selection of content (i.e. user-rated and tagged programs), the trend toward personalization and mass-customization, and the rise of the ‘attention economy’. The way forward for radio is to maintain its traditional strength of high-quality programming and trusted editorial work while at the same time significantly shoring up its relevance in a digitally networked entertainment economy, where distribution (i.e. the frequency, the pipe, or the outlet) is a ubiquitous default but attention is scarce? Heavy stuff, but you get the picture. Here’s how I would put it:
In the music industry the number of gold and platinum hits peaked in 2000 and has fallen dramatically since then. Now that people have more choice, they are spreading out their purchases to more niche selections. If you’re not familiar with this phenomenon it’s called “The Long Tail”. For instance, classical music comprises 12 percent of sales at iTunes, far more than its share of stations or CD sales in regular music stores. Items that are in low demand can collectively sell more than the relatively few current bestsellers, if the distribution channel is large enough. Examples of this include the online retailer Amazon.com and the online video rental service, Netflix.

People and companies have always fought market disruption but the market always seems to get bigger. Classic cases of market disruption include Television, VCRs, Xerox, Walkmans. The markets they threatened just got bigger. Some day soon, radio will enter the music business and perhaps go head to head with music retailers (iTunes) and wireless services. Why not? A listener hears a song on the radio and immediately downloads it for a small fee. Or perhaps the listener pays a monthly or yearly license fee and downloads whatever he or she wants. Again, the future is wide open.
Given these points, several recommendations were made for radio:
Nothing replaces strong content but that alone is not enough. While content has not changed dramatically in the past 5-7 years, radio has lost an entire demographic of listeners (young people). We need to embrace new technologies and do deals with mobile phone companies, suppliers and device manufacturers. Find ways to allow listeners the opportunity to access radio content when and how they want.
Better define core brand identity, develop star brands, identify key success factors, understand listeners better, tease listeners more, do more market research and develop more emotional bonding. Build upon the hard-earned trust that we have developed over many, many years. As Radio Australia’s Chairman, Jean-Gabriel Manguy, put it, “It’s not content that is king, it’s the audience.”