The Battles over Video Games 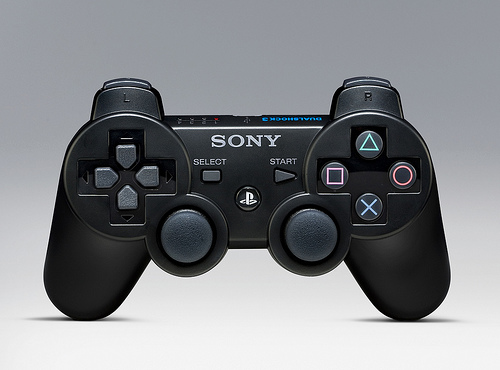 Video games are interactive games that are presented on any electronic devices with video displays. The term of video game represents any recreational computer software that enables computer-mediated interaction or human-computer interaction operated by any electronic devices with computer circuitry and video displays. They are also called computer games, electronic games, or console games. The platforms or consoles which enable operation of video games include arcade consoles, video consoles, personal computers, shared computers, cell phones, personal device appliances, and even miscellaneous handheld devices such as mp3 players and key holders with a microchip processor and a video display. Nowadays, video games are everywhere.

The Battle of U.S. vs. Japan
The history of video games starts with the birth of the computer. Most of the early inventions of video games blossomed in academic and industrial computer laboratories. In 1958, William A. Higginbotham, head of the Brookhaven National Laboratory in New York, invented the first video game, Tennis for Two, using a small analog computer with an oscilloscope. Four years later, Steve Russell created Spacewar! with his group of computer programmers at the Massachusetts Institute of Technology (MIT). Spacewar! was the first multi-user video game using a PDP-1 minicomputer and a rear projection CRT display.

The 1970s were the start of the commercialization of video arcade games. Ralph Baer developed simple video game for television sets in the late 1960s. The success fired up the competition in home video consoles and seeded for the invention of cartridge-based video game consoles in the late 1970s. Atari also released Atari 2006 VCS, which eventually became the most lucrative home video console by the mid 1980s. But since the console market was seriously dominated by only one player, it led to the crash of home game market in the United States. The total home game sales sharply declined to $100 million in the fiscal year of 1986 from $3 billion in the fiscal year of 1983.

The Video Game Crash of 1983 shifted the momentum of the industry from the United States to Japan. New Japanese entrants such as Nintendo, Sega Genesis, and Sony began capturing the world console market. Nintendo released their first video game console named as Famicom in 1983 when the sales of Atari were chilled. Nintendo kept its dominant market share by the mid 1990s when the next generation consoles equipped with 16-bit processors appeared in the market. Another Japanese manufacturer, Sega, stepped into America's console market with their Sega Genesis in 1989. The sales of Sega Genesis steadily increased its market share. Sega rapidly had gained its industry share from Nintendo up to 65% in 1995.

From the mid 1990s to 2000, the home console market was the arena of competition among three Japanese companies: Sega, Sony, and Nintendo. Sega released Sega Saturn and Sony launched its first home game console named PlayStation. Three years later, Sony launched its 2nd version of game console named PlayStation 2 that incorporated a 128 bit microprocessor and 32 MB memory. By the end of 2005, total sales of PlayStation 2 were approximately 33 million units in the United States alone and 22million units in the Asian Pacific region countries.

The Battle of Console Games vs. PC Games
The Video Game Crash of 1983 and the increasing penetration of the home computer in the 1980s offered a good opportunity for computer games to be industrialized. While game console markets fell in popularity after the Video Game Crash of 1983, the computer game market showed signs of innovation and market growth. At the same time, the increasing penetration of personal computers (PC) such as Commodore 64, Apple Macintosh and IBM's PC were another inspiration for promoting a number of the creations of PC games. Commodore 64 sold approximately 17 million units by the mid 1990s and created over 10,000 games.

Driven by the new added features of personal computers, game designers tried to vary the game genres by utilizing networking, high resolution graphics and advanced sound cards. King's Quest, released in 1983, was the first military simulation game using new features of the personal computer. Midi Maze, a network game operated on only Atari ST computers, was less popular than its succeeding imitators, but it was capable of real-time networking on up to 16 computers, inspiring the design of later networked games such as Wolfenstein 3D, Doom and other countless imitators.

In the 1990s, there was a huge progress of the PC game market in terms of both quantity and quality. Throughout the 1990s, personal computers were widely adopted, the prices of microprocessors rapidly decreased, and the CPU speed of personal computers much improved. Since the CPU speed on personal computer was much faster than on video consoles, PC game publishers could develop a high level of real-time 3D graphic games, motion-capture systems, and real-time multiplayer games. They included, for example, real-time 3D graphic games such as Wolfenstein 3D (1992), Doom 3D (1993), and Quake (1996), games equipped with a motion capture system such as Electronic Arts?Madden Football (1989), and real-time multiplayer games such as Ultima Online (1997), StarCraft (1998), WarCraft (2001) and Everquest (1998).

The PC game market has been steadily growing, but the difference of sales between PC games and console games has increased. For example, in the United State the market for PC games has decreased during the six consecutive years after it peaked $2 billion in 1999. The relatively high preference of console games is deteriorating the sales of PC games. The real time strategy (RTS) genre and massive multiplayer online role playing games (MMORPGs), however, has been gaining stable popularity on PC games. It is expected that, in spite of increasing demand in online gaming, the sales of PC games in the near future would become worse, as many of the Internet-enabled consoles entice online gamers.

The Future Paths
Currently, online games are the most popular genre on both PC games and console games. Online games, especially MMORPGs are creating a unique gaming culture. Since the features of MMORPGs allow game users to create and to manage their social interaction with other users, computer-based simulated environment has been called the 烍irtual world? Players are satisfied through exploring the virtual world, fighting monsters or other users, and experiencing the process rather than through completing the games. MMORPGs have gained stable popularity worldwide, and are especially more popular in Asia and Europe. The massively multiplayer online game market in the world has reached more than $1billion in 2006, with nearly $600 million from North America and $300 million from Europe.

In recent years, a dramatic evolution has been in progress in video games. Today, the newest game consoles incorporate previously separate functions of relevant media into one video console, evolving into home-entertainment systems. The newest generation of game consoles features Internet ports, built-in DVD players, built-in MP3 players and cable hook ups. Game consoles with Internet connectivity are capable of online gaming, Internet surfing, e-mail and even Internet television services with IP protocols through modems or broadband connections. This implies that game consoles are eventually converging with personal computers, erasing the borderlines between computer games and home console games. Moreover, the newest consoles will provide more interaction and an increase in gaming community cultures similar to previous computer games. As more next-generation game consoles utilize Internet connections through broadband networks, both gaming platforms and industry practice are likely to converge in the near future.

The introduction of new generation consoles is expecting to prime the market where it has maintained one-digit growth from 2001 to 2004. During the last several years, both of the compound annual growth rate of the world market and of the U.S. market has reached more than 8%. Since the introduction of new consoles, the overall sales of game consoles and software soared up to $12.5 billion in 2006, which is almost a 20% increase over one year. The world market of video games in 2007 was estimated to be around $36 billion, reflecting an 18% growth rate over 2006.

Although mobile games have not been a lucrative market so far because the embedded games are basically free, the market is now drastically growing as both the number of users and the spending on mobile game per user are increasing. In the United States alone, the percentage of playing video games over mobile phones has boomed up to 8% in 2005 from 1% in 2002, indicating the annual compound growth rate of 120%. Worldwide, mobile games are also enjoying more rosy markets in several countries in Europe and Asia. For example, due to the high penetration of wireless broadband in Japan and South Korea, Asia has the largest mobile game market. In 2004, the overall sales reached $843 million in Asia, comparing $480 million in Europe and $294 million in the United States.

In the near future, mobile games are anticipated to be significantly advanced in terms of graphics performance and multi-user interactivity. As high-speed broadband networks and new cellular phones equipped with Internet-enabled microchips are more widely available, mobile game developers are now releasing more advanced online network games such as 3D games and MMORPGS.
下载