"Digital Television Broadcasting" is the major broadcasting pattern used in U.S.A. and U.K. As analogue equipment gradually fade out, all new digital systems are vying for the attention of professional broadcasters to secure a better position in the marketplace.

Let us take a look at each individual system:

Disk Cam, manufactured by NEC, deploys optical disk as the recording device. Edit Cam is manufactured jointly by Avid and Ikegami and it uses a floppy disk recording system.

Both systems are very expensive with prices ranging between $200,000 and $400,000. They have never been purchased by any major television company nor tested and tried on location. It would be risky to pursue these two systems.

A digital system based on the S-VHS system invented by JVC. It produces good quality picture like 16mm film and has an attractive price of $100,000. The editing system is compatible with S-VHS only. It has a pre-read head which enables a picture mixing effect using two editing suits. Digital S has no laptop or portable editing system for post-production. The camera is relatively bulky and consumes a lot of batteries when filming on location.

The system, manufactured by Sony, aims at the top end market of digital cinematography. It is used mainly for production of drama and commercials. The camera can electronically create the "film" look, e.g. soften images to make video production look film production. The quality is as good as 16mm film.

The system uses videotapes thus providing considerable saving in production cost. It has a digital sampling rate of 2:1 which means it only takes 1/2 of the original information (10:1 means 1/10 of the original information). It also has a memory card system which allows the cameraperson to set up certain mood electronically. It is 16:9 widescreen switchable with 4 channel digital audio for stereo sound recording.

The camera is now priced at $500,000 but provides a list of very complicated and complex functions that are not very practical. Besides, Digital Beta is not compatible to any other systems. 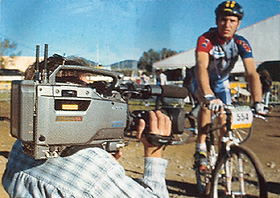 This is another digital system from Sony. This system can play old Betacam SP material. It can also record on Betacam SP tapes. It offers a sampling rate of 10:1 compared to 2:1 by Digital Beta. The output quality is not as good as Digital Beta but the difference is not likely to be detected by the naked eye. The system offers extremely low light capability, switchable to 16:9 widescreen, colour picture and sound playback via camera.

The special feature of the shot marker system invented by Beta SX allows the cameraperson to put an electronic mark on a good take which can easily be recalled during editing. As a result, the system can help speed up the editing process.

The only problem Beta SX has lies in the editing area. When the editing system was first introduced, it failed to provide frame accuracy and had an error of ± 12 frames. Although the software has been improved to rectify the frame difference, confidence in the system is lost. 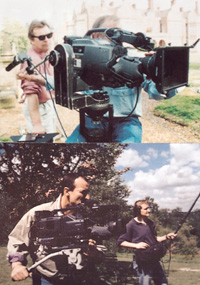 This is a Sony system aiming at the corporate market. It is a semi-professional device to replace the Hi 8, S-VHS market segments. DV Cam adopts a non-broadcasting standard of 4:2:0 compression. It has a cliplink system (similar to the shot marker system from Beta SX) providing up to 198 cliplink per tape.

However, the post production system for DV Cam has been delayed for unknown reasons. This system is the only digital system manufactured by Sony that is compatible with DV.

The manufacturer is Panasonic. The system should be compatible with DV and Sony's DV Cam subject to further development.

It uses a relatively small size 6mm tape. The system first started at 4:1:1 compression but was later changed to 4:2:2 due to market demand. The camera has similar functions as the Beta SX system including good picture quality, set up memory card, 16:9 widescreen switchable colour picture and sound playback. All these features come with an attractive price of $150,000.

DVC Pro also has a reliable laptop and VTR editing system. The setbacks are that the system cannot play Beta SP tapes and it has no shot marker feature.

DV stands for Digital Video. It is the only universal system in the digital chain as all manufacturers agreed on the same digital format. The system was originally produced for domestic consumer market. However, the picture quality is considered so good that some of the broadcasting networks started using this system for certain productions. The manufacturer then upgraded the system to a better version of the 3 chips DV camera with interchangeable lenses. 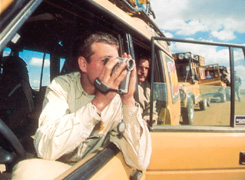 However, the digital camera has a major shortfall in audio recording as it requires modifications of sound recording accessories that are only available in the professional equipment market.

On the whole, the DV camera is lightweight, compact and user friendly. A producer is able to use the DV camera to shoot programs according to his or her perspective and then edit the work with the help of the laptop editing system (PC editing is also available).

Which System to Choose

When digital technology was first introduced, Sony's Digital Beta nearly monopolised the market. Then Digital S and DVC Pro came into existence and finally Sony has to market another system known as Beta SX 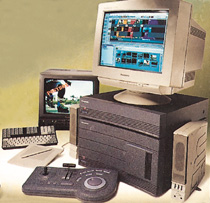 which was more reasonably priced.

On the whole, Digital Beta is of top quality but expensive. It is good for high quality drama production. For general trade acquisition, broadcasters can choose between Digital S, Beta SX and DVC Pro. Amongst these systems, DVC Pro is the only system that has full editing features including laptop and VTR suits. Other non-linear editing facilities like Avid and Quantel edit box both adopted the DVC Pro system.

To date, Fox TV is the only corporation that has purchased Digital S. Associate Press TV currently uses Beta SX whereas BBC, ITN, Reuters, NBC and WTN all use DVC Pro. Most broadcasting networks tend to go for DVC Pro because the trend is that manufacturers of digital equipment are developing new systems and gears that are compatible to DVC Pro.

The DV camera system is an alternative for the professional broadcaster with all the user friendly features and acceptable picture quality. It also provides opportunities for a producer to operate camera, audio, lighting as well as directing and producing programs all by himself or herself.

At present, BBC has employed over 1,000 DV cameras in their daily operations and DV cameras are commonly used by news teams in Europe. DV Camera system is definitely a rising star in the new digital broadcasting era.